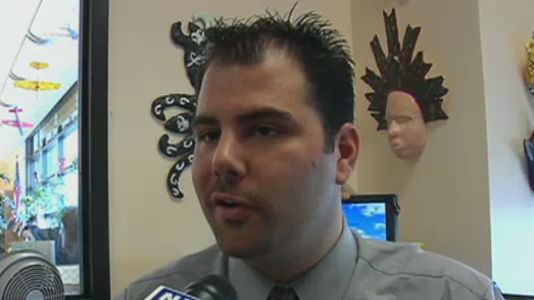 Christian Del Re of Leon M. Goldstein High School for the Sciences in Brooklyn

Christian Del Re a once rising star (once being the operative word…) in the public school system has found himself on the brink of being fired after it was discovered the assistant Brooklyn principal had exchanged a mammoth 2919 text messages with his  an 18 year old female pupil at the school where he worked.

Collecting an annual paycheck of $101,056 Del Re has now found himself sidelined since the beginning of September in a new role that does not involve any student contact since school authorities decided to act on the fracas, which amazingly Del Re insists didn’t lead him to compromising his position as a school administrator.

The matter first came to the school’s attention back in January of this year after fellow students began noticing questionable behavior between Del Re and the 18 year old student.

nydailynews: The studens claimed they saw Del Re playing with the young woman’s hair and leaving the Manhattan Beach school’s parking lot with her in his car.

Playing with the young woman’s hair? Leaving the school parking lot in her car? Because they wanted to concentrate on extra ‘course work,’ in order to get the requisite A’s?

Both Del Re and the student in question told investigators that their relationship never went beyond texting and talking.

Which on some level might not be too incriminatory (assuming one is willing to believe nothing physical happened between Del Re and the girl) except that is when it involves 3 hour conversations at 3 am in the morning, 3000 back and forth texts over a course of 3 months, which averages for those mathematically inclined to 1.3 texts per month hour.

Probed by Richard Condon, special commissioner of investigation for the New York City School District Del Re insists he was only helping the girl cope with problems (while creating a whole batch for himself).

Said Conlon: “ (according to Del Re she) would talk to him about problems at school, problems with other students and problems with her boyfriend.”

Problems with her boyfriend? Or was the problem he wasn’t the boyfriend?

In an attempt to prove he’s not a pervert, Del Re turned over three letters of recommendation he wrote to help the student get into college and land a job.

He admitted that on three occasions he gave her a ride to the train station. He also claimed their after-midnight phone calls stemmed from him getting home from work late.

Of course what’s most compelling about Del Re’s assertions that he was only helping the girl is the understanding that Gia, De Re’s wife and former high school sweetheart was herself not aware of Del Re’s devotion to the student. Then again why should she need to know about her husband calling students at 3 am in the morning? After all who doesn’t value a school authority checking in and discussing ‘boyfriend’ problems…?

To date the 18 year old girl maintains that Del Re never touched her. Which may be true or just her way to save herself and possibly Del Re from rebuke? When asked for comment Del Re declined the nydailynews overtures. Can anyone guess why…?