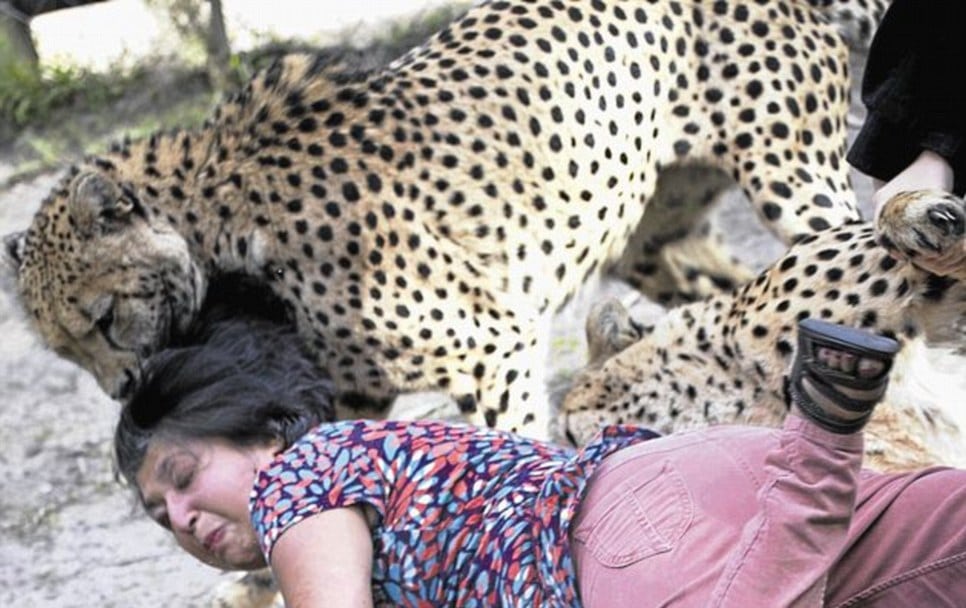 A British holiday maker, 60 year old Violet D’Mello is lucky to be alive after being wrestled to the ground by two cheetahs in an enclosed wildlife sanctuary frequently populated by tourists in South Africa.

Offered Violet D’Mello: ‘It was terrifying and happened so quickly.

‘One minute I was in the enclosure with the cheetahs and the next it was biting at my head.

‘I was thrown to the ground and had to play dead while it mauled my legs and stomach.’

The incident occurred whilst a 8 year old girl was bit on the leg in the pen area before cheetahs turned their attention to the girl’s 7 year old brother. It was then that Violet D’Mello turned to intervene only to suddenly find herself the new ‘candy’ of attention.

At first the offending cheetahs were successfully pulled off but then the first returned to see what they could make of Violet D’Mello, biting and gouging her legs whilst doing so. It was only after a group of tourists were able to pry the two animals off that Mrs D’Mello was able to make her get away.

Mike Cantor, the park ranger at Kragga Kamma Game Park offered that he had grown up with the cheetahs since they were babies, insisting that they are not aggressive animals and that they had probably confused nearby commotion as playtime. What though is obvious, is the degree how these animals who preternaturally have a wild disposition reverted to a kind of instinctual demeanor, this despite the park ranger’s insistence that the animals are not aggressive. Which in all may suggest although such animals, or any animal whose natural habitat is that of the wild may find themselves reverting to such dispositions despite carefully manicured behavior at the switch of a flick. Which brings us back to the notion, ‘you can take the cheetah out of the wild but you can never take the wild out of the cheetah.’

Hopefully Mrs D’Mello and other tourists will be more thoughtful in the future before making a pledge to ‘play’ with animals whose natural temperament is to rip one’s innards to smithereens….

Offered Mike Cantor about future visits in the ‘play pen’ he offered the following:

‘We love the cheetahs here and always saw Mark and Monty as ambassadors for the species. It was never about the money for us, but we have loved allowing people the chance to experience these beautiful creatures up close.

‘We’ll re-evaluate the situation in a week or two and may let people in again if we feel it is safe to do so.’ 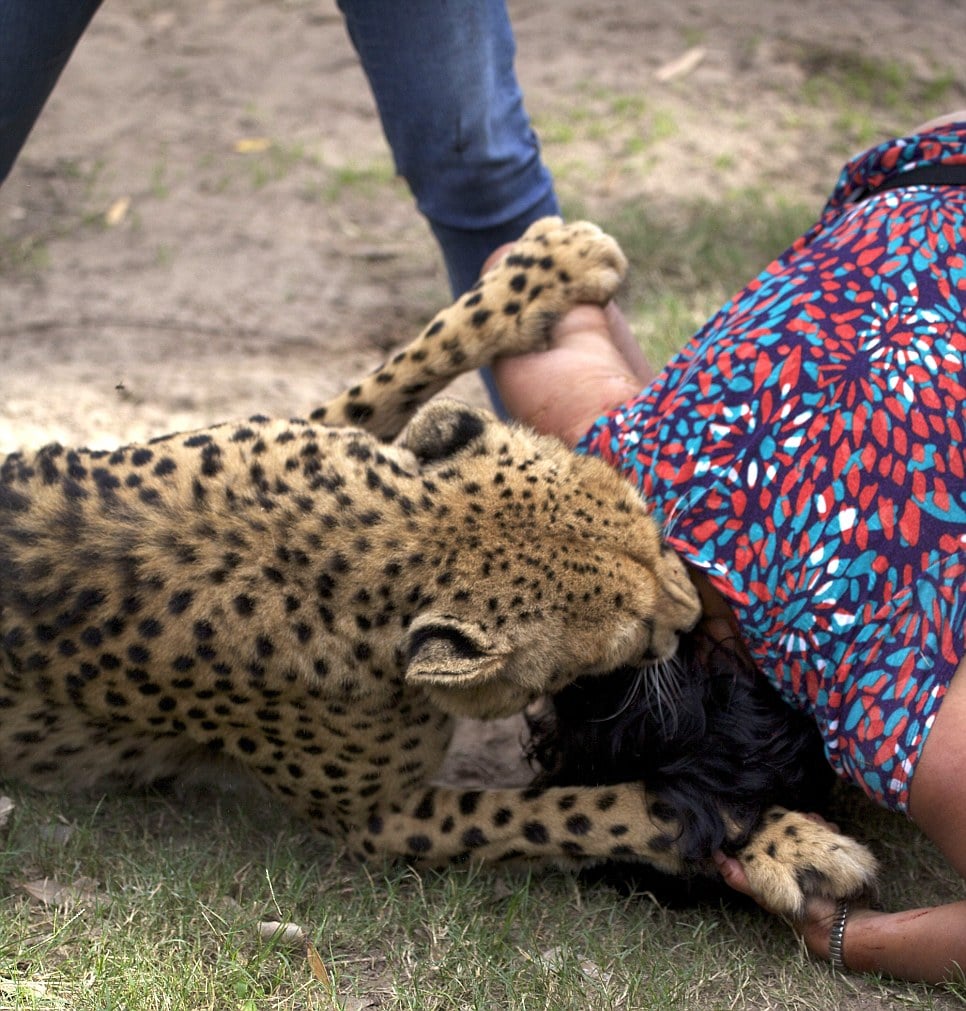 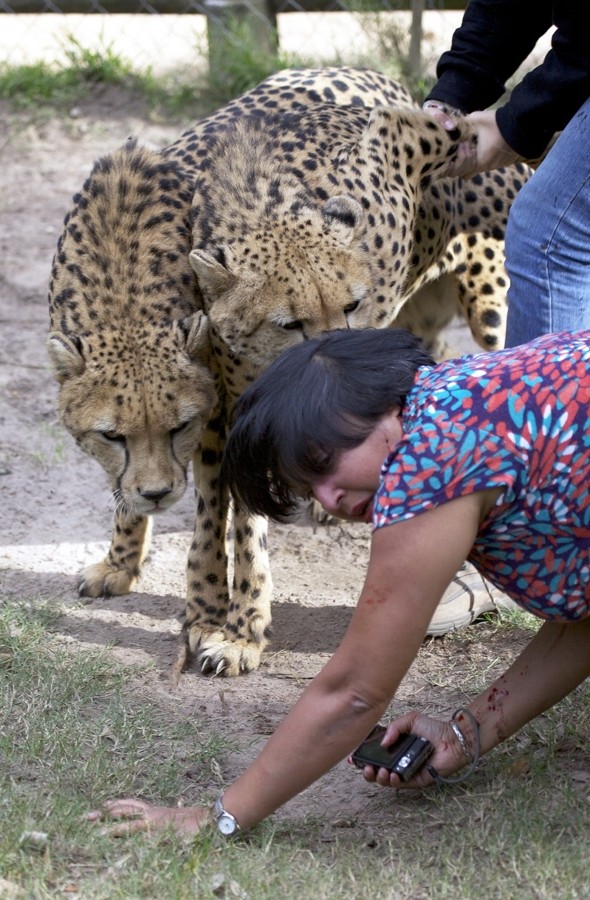 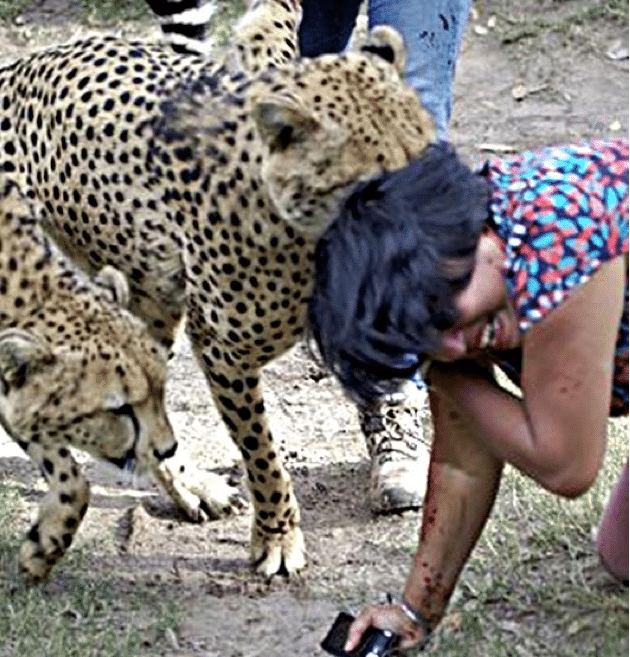 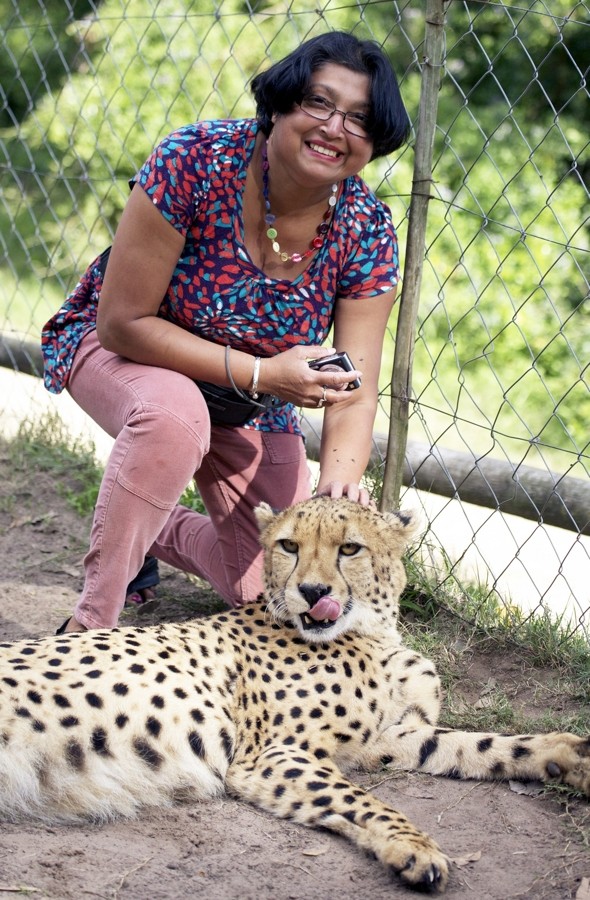