A photo of Alexa Chung on instagram donning one of her best assets- her legs has being met with a barrage of hate comments. But why?

On Monday night, model turned MTV presenter Alexa Chung shared a photo of herselfand her mother on the picture sharing website instagram. That’s when the comments started flooding in…

A sampling of some of the comments include the following: 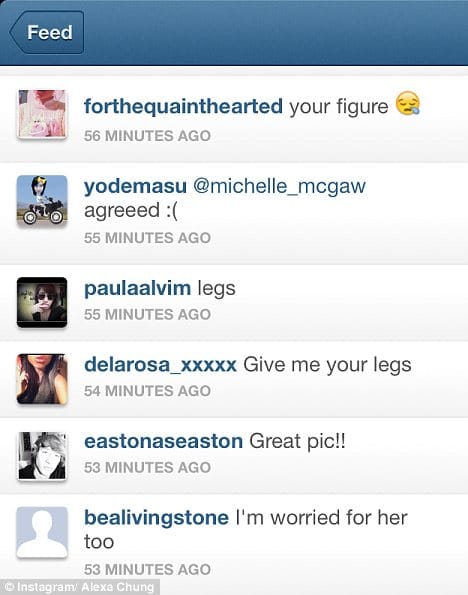 Overall the consensus was not too complimentary with the model being accused of not eating, revitalizing concerns that the model is exhibiting strains of anorexia.

Offered one commentator: It is equally alarming that people ENVY this degree… as it is NOT a healthy degree of underweight. Certainly, they shouldn’t want to be like this,’ 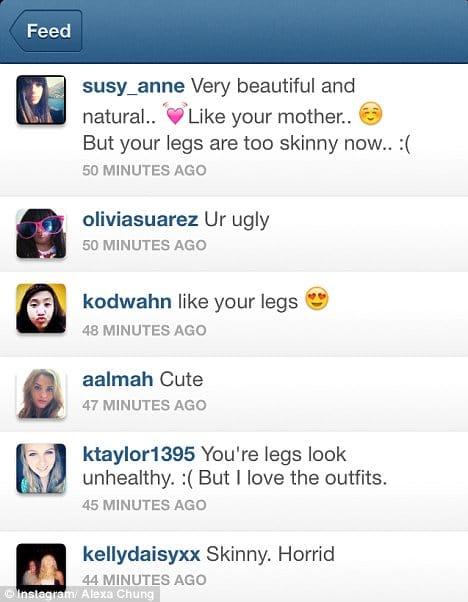 Eventually Ms Chung delicately weighed in, probably by now overtly conscious of the disarray her posting had caused (congrats Alexa).

Posted the model in return: Hi, I am here. I can read. Ok everyone thanks for the teen angst discussions. People are different sizes. I’m not trying to be thinspo for anyone. I am now making this acct private. Byyyyyeeee.

Of course this leaves media pundits to ponder the obvious. Is Ms Chung too thin? Should she be made into some sort of thinspo spokesperson or should she be allowed the leisure of her own body frame whether we have an opinion or not? Then again why should it be anyone’s concern how the model looks? Is she the tell all barometer of how young women aspire to look? One can’t imagine that Ms Chung has willfully wished to be the exemplar for this role. But then again who willfully subscribes for such tenuous roles in the first place?

If only celebrities could live their lives unimpeded, but then again that may be the price to pay to be in the public consciousness….?

Concerns as fans wonder if Alexa Chung is going through bouts of anorexia?