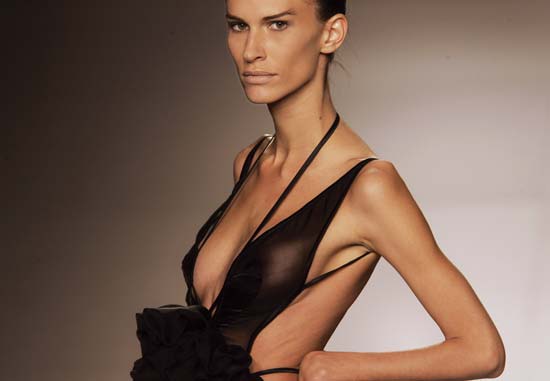 Israel is hoping to set fashion industry health standards by being the first government to say no to underweight models.

A law passed late on Monday requires all female and male models to have a body mass index, or BMI, of no less than 18.5. (BMI is a ratio determined by calculating height to weight).

Models who look underweight are also banned, and the law enforces all advertisers (with the exception of foreign publications sold in Israel) to “own up” and explicitly state if models have been graphically manipulated within photos to look thinner. This allows viewers to understand that the ultra-slim bodies they see in ads are in fact constructed digitally.

Lastly, models will have to produce a medical report at each shoot, stating that they are not malnourished according to World Health Organization standards. These OK’s cannot date back further than 3 months.

“Beautiful is not underweight, beautiful should not be anorexic,” said Rachel Adato, one of the lawmakers who pushed the bill.

The idea behind this bill is that women are being fed a skewed depiction of what healthy should look like. By eliminating obscenely thin models, these lawmakers hope the number of eating disorders in Israel will decline, and that the fashion industry itself will also take notice.

Some, however, worry that models that just “happen to be unbearably thin without starving themselves” will be unfairly out of a job.

Eli Edri of the Roberto Models Agency was quoted saying, “The indexes on which the law is based are arbitrary and are not appropriate for every model. I know many models who are totally healthy girls who might be disqualified because of the law.”

To this we say, produce the medical report stating that you are “healthy”  according to WHO standards, and there should not be a problem. What is the worst case for these models? They’ll need to gain a few pounds? What a faux pas!

I have a sneaking suspicion that for the ladies who live “naturally” under the BMI, gaining a little bit of weight will be slightly easier than for those who currently starve themselves to keep up. If anything won’t this law ensure their health and even better get more women to address misnomers as to actual body weights and those that the media tends to idealize ?

“On the one hand, maybe we’ll hurt a few models,” Dr. Adato said. “On the other hand, we’ll save a lot of children.”