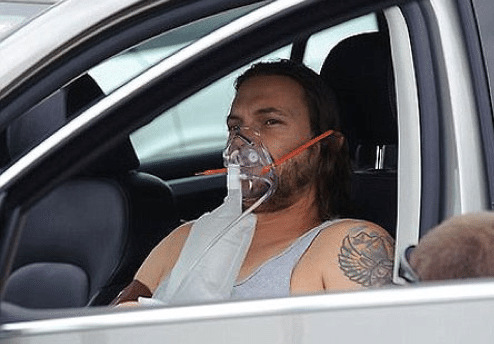 Oh dear. At least we can offer K-Fed some deep fried doggie biscuits, but really I don’t know if that shit is allowed back in his diet yet on account of him trying to prove that he still has a smidgen of self respect and discipline. But probably not. Which is how today his sorry ass ended up in hospital after his fat ass took one long at the sun, that days exercise regimen on his new stunt roundezvous ‘Excess Baggage’ and gave in to multiple chest palpatations and a knowing wink from K-Fed that somehow today he had gotten out of some obligatory torture.

sfgate: The former dancer has been taking part in weight-loss reality series “Excess Baggage” and he fell sick after completing a training session with Australian Football League (AFL) team the Greater Western Giants in Sydney on Monday.

Federline is said to have suffered chest pains and was treated by a medic on-set before being taken to the Mount Druitt Hospital.

Kids for someone who actually grew up with the rancid Australian summers let me tell you outright K Fed: ‘I feel your pain nigga. It’s damn hawt out there in the desert. That shit aint designed for tender ass walks without your necessary flotilla of hungry golf ball sized mosquitoes constantly biting your ass.’

Personally I wouldn’t even dare venture out into the shade unless that shit said at least 100 fahrenheit. And of course in K-Fed’s case you know it didn’t but he still needed to prove he had a dribble of self respect up his sleeve.

The star was initially believed to have suffered a minor heart attack, but doctors found this wasn’t the case and are conducting further tests, according to a spokesman for the Nine TV network.

The representative says, “Kevin was… completing an AFL-related challenge. He did his challenge, which was running and catching the ball, then while his (weight-loss partner) was taking the same challenge, he reported chest pains and a racing heart.

Kids, what are they doing to K-Fed? Don’t they know that bixch only gets around in 4 wheel drives and titanium golf  buggies? Who came up with the stupid idea of getting KFed away from his chicken fried nugget box and in front of the desert? Is that really being nice to K-Fed? Is it really nice to deprive K-Fed his necessary daily calorie quota of 17 000 calories just so we can go ooh and ahh that bixch still has cheekbones nestled deep into his fat face recesses? I know K-Fed I’m just trying to tell them bixches at home the way it is. I know B, I’ve got you covered, a bucket of the good shit on me when you next pass by Dunkin Donut. Yes diet spicy peanut sauce on the side.

“Obviously on this show we have a lot of paramedics on standby and they treated him for the first signs of a minor cardiac arrest, called an ambulance and had him taken to the hospital… They want to do blood tests and (he) is likely to be there until at least late tonight.”

Federline, 33, was previously taken ill during filming of the show in December, when he collapsed and was treated for heat exhaustion.

Nevermind K-Fed I’ve got a bucket of the good shit here in front of me right now. If I could reach through the TV I’d let you lick the brine off my fingers too. I’ll see you back on the step climber machine tomorrow….unless of course you don’t make it to tomorrow.