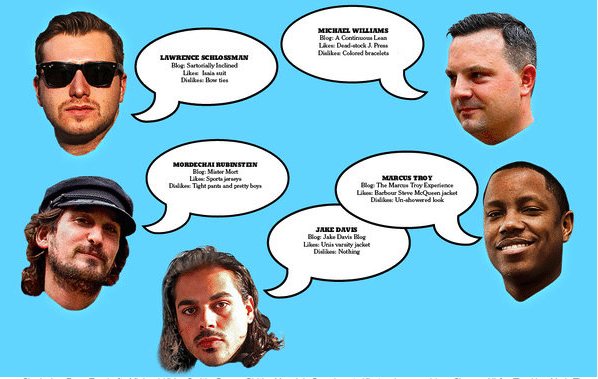 Considering the avalanche of style experts/bloggers in the fashion industry being chiefly female or gay (so I have been told) the NY Times has bravely come out today to assert that in fact there are straight male bloggers in the fashion world. Which is perhaps another way of saying not all straight men scrape their knuckles on their pavement or drool at the sight of a pick-up truck (of course I am willing to bet there are gay men who do both of the above….).

NY Times: “…these are macho fashion bloggers, writing for a post-metrosexual world. “It’s translating this sort of very-guy approach to something that’s so traditionally been quasi-effeminate,” Mr. Thoreson added.

Some are old hats who have embraced the digital age to spread their dandy message. But many more are fashion newbies — videographers, publicists and everyday retail hustlers who speak for a new generation of style-conscious men. The fact that they’re blogging about clothes that could have been worn by 19th-century miners means that they can gush about pocket stitching and still feel secure in their manhood.

Secure about their manhood? Is that to suggest to have once paid attention to fashion or even one’s dress sense/appearances was tantamount to disclosing you were gay? Isn’t that sexist? Isn’t that cornering men into a dominion that suggests a man can only ever be a man if he dresses a certain way, looks a certain way and only pays attention to certain things and not other things- such as fashion. Until now that is….

The NY Times then goes on to list 5 trending male fashion bloggers, who I have listed here, but I suggest if you want to read more about them to go to the article. One thing that is interesting though and which is indicative is that the traffic each of those 5 sites mentioned doesn’t on average go above 150 000 impressions a month, which once again in relation to female fashion sites which go well into the millions each month that yes there’s a demographic of straight men who are interested in what’s happening in fashion (I’m one of them) but for the time being a small one. Perhaps if we loosen up on attitudes and perceptions about what it is to be a man the type of traffic those web platforms garners will go up quite nicely over time.

Here are the bloggers mentioned in the NY Times piece:

LAWRENCE SCHLOSSMAN, 24, Sartorially Inclined, How to Talk to Girls at Parties