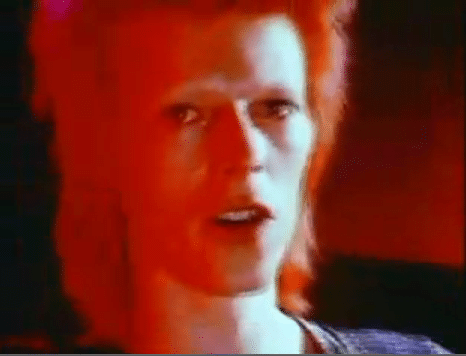 With his groundbreaking hit, ‘Space Oddity,’ first released in 1969, he was then able to jettison to other parallels, concocting a visage of eerie esoteric stage personas that he had now become to effect in real life. Cal it method acting, taking one’s character to extreme or just courage or necessity to escape himself and parallel other fantastical worlds. In essence it all came as a result of the changing times Mr Bowie, like many of his peers at the time were being exposed to and it made for visceral performances.

Perhaps that sums up the magnetism of Bowie: so many people wanted to be him because they could identify with him. He was a professional chameleon with intellectual depth and honesty, telling people, girls, guys, gays, kooks it was OK to be themselves. Hot tramps, he loved them so.  Children driving their Mamas and Papas insane, it was normal. Rock ‘n’ roll walking suicides weren’t alone and nor were those searching a divine scheme of things. Mummy is yelling no? Escape to Mars. Work’s down the drain? Go to Suffragette City.

“I wanted to prove the sustaining power of music,” said Bowie once. He achieved his aim – perhaps more than any other British pop star of the 20th Century.

Tempered by his love for his wife, the supermodel Iman and their child Mr Bowie these days who declined an invitation to knighthood (he argued it was never his intent to achieve that status) has these days found contentment to read voraciously, paint, keep up on upcoming British artists (I understand he is an avid collector) and to enjoy being a father and husband. As Mr Bowie reflects in the song ‘Changes,- ‘time may change me but I can’t change time…

Perhaps what beguiles this author and to some degree underscores the sheer brilliance of Mr Bowie and his innate essence of being a performer is the story he once relayed whereby he’d get on the NY Subway, with glasses, a flop hat and a Greek newspaper, which he would read upside down (after all it’s all Greek isn’t it) and relish in his anonymity all the while in effect once again in character.

To one of my personal heroes and great inspirations this author solemnly gives Mr Bowie the stage- ‘David- we’re simply absolute beginners. Much love Scallywag.’

(the interview below with Russel Harty is a classic and very revealing expose on the artist and enigma that is David Bowie.)