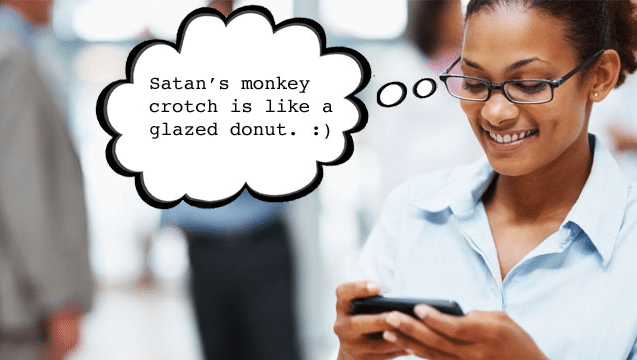 What are we to make of a culture that at the same time welcomes the allure of technology but at the same time condemns the use of it? Or to put it succinctly what are we to make of an authoritative stance that sanctions the way we choose to communicate, how we communicate and more to the point what we communicate. Fine certain communiques could be perceived incendiary (Let’s blow up government headquarters) but texting the words: ‘satan,’ ‘glazed donut,’ ‘quickie,’ ‘monkey crotch?’ What exactly is going on here? Welcome to life in a conflicted Pakistan.

A cursory regard of some of the banned words that Pakistan’s Telecommunication authority (PTA) has subpoenaed to have vetoed going forward reveals a treasure trove of familiar swear words (crap, damn, hobo) some homophobic stances (imagine not being able to use the words gay or lesbian?) and then some truly puzzling choices. A cursory snapshot of some of the planned banned words appear below: 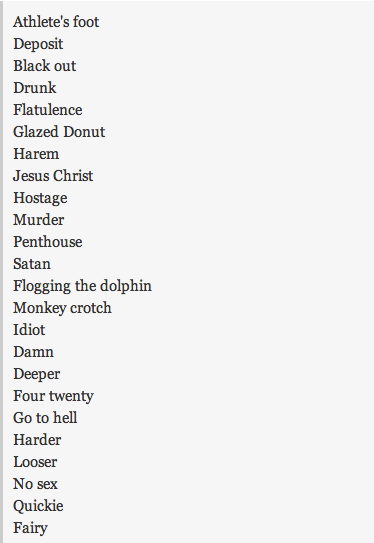 Of course we ought to wonder how the plan has been moved in Pakistan and according to the hindustantimes,not too well:

The move has been greeted with ridicule and derision, particularly by Pakistan’s vociferous users of internet forums and micro-blogging sites like Twitter.

Since the PTA’s lists of offensive English and Urdu words and terms – containing 1,106 and 586 items respectively – became public a few days ago, it has become the butt of jokes on the web.

The PTA sensing it was on the backend of a backlash has now come out and said it has no intention of freezing up the freedom of expression but just the spamming of it. Huh?

“The right of free speech extends to all subjects which affects way of life without limitation of any particular fact.

“However, right of freedom of speech and expression is not unfettered and unbridled,” the letter said.

Which is tantamount to saying you are free to express yourselves as long as we approve it first. Or can we really argue that the PTA have a point in saying that in certain instances the copious use of certain words goes overboard and all it wants to do is spare us? Or is it a subtle attempt by authorities to steer public discourse which with the advent of twitter has multiplied a thousand times in a way that authorities can still monitor and affect the public’s discourse? But then again how does the censoring of engagement of topics still come within the ambit of the right to freely express ourselves and can we really argue here in the Western world we have it so good when we are being continuously clipped and watched by authorities when we choose to express ourselves in a public forum?

Mohammad Younis, a spokesman for the PTA, described the efforts to filter offensive words from text messages as a work in progress.

He goes on to say the following:

“These documents should not have been made public.

“They were designed to assess the system and to see how effective it is in filtering content.

“They were intended to take things closer to reality and can be revised,” he said.

Just reading this one gets the feeling that all sorts of double speak has been engaged by the PTA, the type of double speak that the PTA would of course like to rid you of….