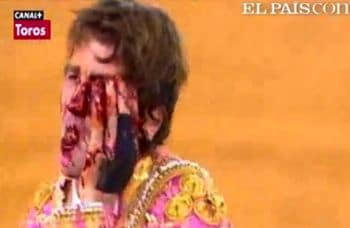 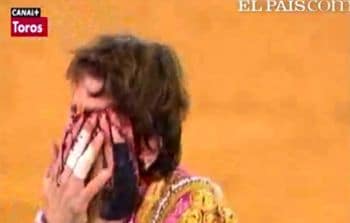 Just last week authorities in Barcelona, Spain announced that bull fighting would soon no longer exist as a spectator sport and perhaps with good reason as reports are now circulating out of Spain about how one matador, Juan Jose Padilla, yesterday endured the wrath of one particular bull.

So visceral were the matador’s injuries it is said that the bull gored Padilla through his jaw with it’s horn pushing out past his eyeball. Not an injury one would ever want to write home about…

Exclaimed the matador whilst being rushed to hospital bleeding profusely:

As the video shows, the attack begins circa 4..25 as the matador is being challenged by the matador when he trips and is pinned down to the ground where upon he is then gored.

As of press the matador is in critical condition, having undegone a 5 hour operation, where surgeons used titanium plates and mesh to reconstruct part of Padilla’s face.

Going forward Padilla is expected to sustain facial paralysis and the loss of sight of one eye.

Despite Padilla’s injuries yesterday, animal activists have been arguing all along that the animals are subjected to all sorts of debasing inflictions, including the piercing of the bull’s largest muscle- it’s neck and the gouging of its own eyes with vaseline forcing it in most instances to only see black as it enters the ring- hardly the fair fight of goliaths as these events are marketed which Catalanian groups have been arguing the restitution for since the announcement of last week’s ban perhaps as a fight for their independence by proxy from Madrid, the country’s capital.

No word as of yet what authorities have in store for the 1200 pound bull, called Marques, that gorged Padilla but even Padilla would perhaps agree all is fair in love and war. Or would he?