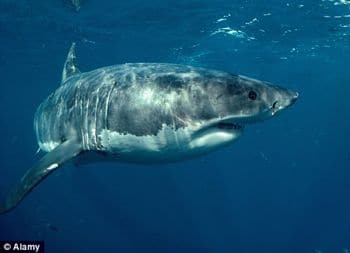 Out of the dailymail.co.uk today come the grizzly tale of a young man, in his early 20’s been fatally attacked by a great white shark whilst body surfing with buddies not less than 50 feet from the shore at Cape Naturaliste, Western Australia.

Skimming the article the author paints a bleak picture of Australians being marauded on a regular basis by these creatures:

According to the Australian Shark Attack File, there have been 13 other fatal shark attacks around the continent since 2002.

Today’s tragedy was the second this year – in February an abalone diver was killed when he was attacked by two sharks, believed to be great whites, in Coffin Bay, South Australia.

The picture of a leaping great white shark sensationalizing the event certainly does little to distill the myth of the great white shark as a predator. But as an Australian who grew up surfing all his life I would qualify that authorities do a fairly amazing job of setting up nets around those waters known to attract sharks and ultimately it does come down to the swimmer acknowledging that the water will always be a haven for what lives in the wild no matter how entitled we feel about the shores or our right to swim there.

‘There were at least another 20 people in the water but it seemed that no-one had seen the shark lurking about,’ he said.

‘There’s a big seal colony around the coast and the shark might have mistaken the young man for one of the seals – it’s been known to happen.’

Been known to happen but perhaps because films like Jaws have ingrained the idea that being eaten alive by a shark is a daily challenge to be reckoned with. Or is it?

He agreed with local people that the shark had probably been attracted to the area by seals that were known to inhabit the area.

‘There’s a seal colony just next to the lighthouse – there’s a channel the seals use along there,’ said Mr Hillman.

He believed it was strange that the shark had attacked in the middle of the day, pointing out that they usually occurred early in the morning or at dusk.

Local people said it was the first major shark attack they could recall in the area, which is a popular surfing and fishing spot.

But locals said it was known that sharks prowled the waters and there was also the added danger of powerful undersea currents.

What can one say when ultimately man is forced to reckon with the existence of nature and what goes on within the periphery of nature? To assume that shark’s are on the look out for human bait is fool hardly and a propagated myth courtesy of the culture at large. That said I can’t wait to take my board out for a surf next time I’m back in Australia.

How about you, will you suddenly give up surfing just because the media brought it to your attention that tragic things from time to time happen?