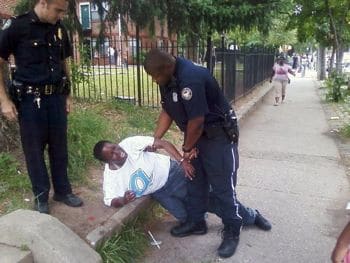 According to 40 year old Shequita Walker who suffers from a disability which limits her range of movement, she was sitting on a metal chair by the lawn of an apartment complex where she lives minding her own business waiting for the ice cream truck to pull up, as she did on most days, when on the afternoon of  April the 21st police officers pulled up and demanded that Ms Walker get off the lawn.

Ms Walker responded that she was within her right to stay seated and that in fact on previous occasions other passing police officers had made no bones of her sitting on the lawn.

That of course did not sit well with one of the officers, Officer Kenneth Thomas who then approached the disabled Ms Walker, grabbed her wrist, twisted her arm which then caused her to fall onto the concrete floor where she sustained a shoulder injury which required an ambulance having to come and take Ms Walker to hospital.

Since then, Ms Walker has gone on to argue she was falsely arrested for disorderly conduct, and improperly treated especially in lieu of her disability (which one assumes Officer Kenneth Thomas was aware of at the time) and has as a consequence has begun a  lawsuit seeking damages from the Atlanta police department.

Of note, a review board conducting a background check on Officer Thomas discovered that during a 5 month period, Officer Thomas making a total of 38 arrests, 27 of which were for disorderly conduct, which in relation to other patrolling officers in the area were at a ratio of 3 to 1.

All of which raises some compelling questions: Is the behavior of Officer Thomas endemic of one man who has a hard on for his beat, endemic of a police force that has misplaced reasoning and common sense or endemic of a public that feels it knows better than those entrusted to apply the law?

Then again if you are going to apply the law perhaps some degree of sensitivity might go a long way, but then again with the dangers police officers sometimes face, assertive behavior might be the way to go, assuming the necessary use of force matches the severity of perceived crime at hand.