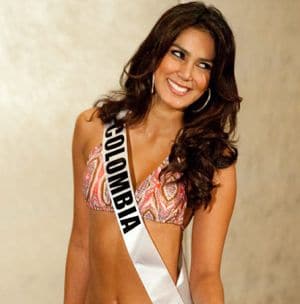 Why bother with a g string when you can just flaunt it outright?

It seems Columbia’s entrant to the Miss Universe pageant, 22 year old Catalina Robayo has a thing for dressing sparse. How sparse? Apparently she’s been seen attending publicity events for the upcoming Miss Universe pageant sans underwear and as a consequence has received a volley of stern warnings from officials for her risque dress appearances.

dailymail.co.uk: ‘People have been pretty upset by it; there have been photos and media appearances where she has completely had her crotch out.’

Talk about a spot of hot bother under the collar…

She was photographed at one official appearance by a local newspaper doing her best Sharon Stone impression.

Miss Robayo was sitting down, wearing a short bright coral dress and failing to cross her legs.

The photograph, which allegedly shows her sans panties, was published on the front page of the local paper

Now that ought to get you some needed publicity. Of course one has to wonder was this a ruse on behalf of the Miss Columbia or just a natural oversight on her part? But then again isn’t that part of the allure of a roomful of some of the world’s most beautiful women? Wondering what they could actually look in the buff? Or is that to say when it comes to such things we really do care about decorum? Or do we really only prefer to pretend that women like Ms Robayo like to assume appropriate guises of preferred behavior? After all as a society aren’t we being hypocritical for vexing over Ms Robayo’s preferred state of dress when in essence the contest is singularly focused on a woman’s appearances and the occasional ability to appear politically correct….?

Personally I think Ms Robayo is a firm (no pun intended) favorite for this years Miss Universe crown, assuming some of us get over our pretenses…