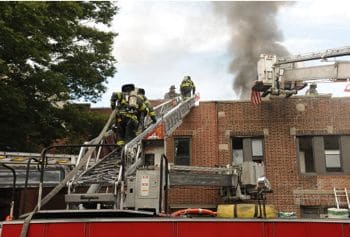 Today things are exceptionally dizzy in the Bronx.

One can only wonder what exactly set off the following chain of events, but we’ll try to make sense of things anyway…

According to police reports, a Bronx man, carrying what turned out to be a severe grievance against his roommate (which reminds me to buy my roommate a box of chocolates later tonight…) set upon his 65 year old roommate, Hobart Barrow with a machete.

After bludgeoning the roommate about the head (amazingly Mr Barrows is still alive but in critical condition) he then went about the dizzy task of setting himself on fire (should we be thanking popular culture for the predictable cataclysmic ending?). As luck or misfortune would have it (yes I know some of you are thinking he should have burned to hell…) the fire alarm went off which happened to grab the attention of a passerby, Ken Banks downstairs who was on his way to band practice.

Banks in the mood to be a good Samaritan is said to have run up the stairs and dragged the offender by the belt, the only item on him that hadn’t by this stage been incinerated. As of press the offender has been rushed to hospital where he too is also in critical condition.

All of which raises the following questions, what could have possibly inspired the type of reaction or choice of action on behalf of the man with the machete, what is it that we don’t know about the case (could it be possible that Mr Barrows is also an instigator here and that the man with the machete only reacted the way he understood under extreme duress?) and why today, why now?

Ultimately one can point to the pressures of living with roommates in an unforgiving city that forces strangers to try and find agreeable ways to coexist, from sharing in the burden of keeping communal quarters clean, the rent paid on time (hmm, which reminds me…I need to buy a very big box of chocolates) and then there’s sometimes the simmering tensions of unresolved tensions that sometimes drives some of us to desperate courses of actions.