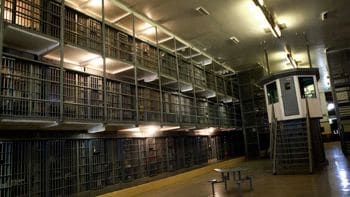 Raising revenue for the state coffer has taken on some thinking out of the box. Facing a deficit of sorts, Arizona has come up with the novel idea of charging people $25 a pop each time they visit a state prison. Of course what makes this all the more politically palatable is the fact nobody likes tax increases, cuts in social services so instead the state thought to itself since prison is where all the bad guys supposedly live, why just don’t we stick it to them? Surely nobody will mind? Well at least in theory…

nytimes: New legislation allows the department to impose a $25 fee on adults who wish to visit inmates at any of the 15 prison complexes that house state prisoners. The one-time “background check fee” for visitors, believed to be the first of its kind in the nation, has angered prisoner advocacy groups and family members of inmates, who in many cases already shoulder the expense of traveling long distances to the remote areas where many prisons are located.

Background fee? Now isn’t that a cute way of trying to squeeze yourself out of a political backlash amongst certain sectors of the population? After all if one never needed a background check to visit a prison before, why the cynical branding to make the charges stick now?

David C. Fathi, director of the National Prison Project of the American Civil Liberties Union, called the fee “mind-boggling” and said that while it was ostensibly intended to help the state — the money will be used to repair and maintain the prisons — it could ultimately have a negative effect on public safety.

“We know that one of the best things you can do if you want people to go straight and lead a law-abiding life when they get out of prison is to continue family contact while they’re in prison,” he said. “Talk about penny-wise and pound-foolish.”

First of, one wonders how much of that $25 will be used to actually improve the conditions of prisons and secondly why are the poorest members of society (ie the prisoners and one wonders their visitors) being subjected to an effective lien for being a prisoner? But then again there are those who argue with all the hours locked away amenities prisoners receive it’s only right. But is it really?

“What will happen is that people will just stop visiting,” said one woman, adding that most prisoners “live for” visits from relatives.

Human rights group, Middle Ground for their part argue that charging a $25 fee is just a ruse to raise money for general public purposes.

“This was a scheme — in my mind, a harebrained scheme — to try to come up with the money,” she said.

And yet in desperate economic times it may ultimately come to be what’s politically palatable. After all law abiding citizens who work and pay taxes may resent lawmakers passing taxes or declining public sector services, but prisoners who don’t vote it seems are an expendable minority.

Aren’t you glad in the new world order things are becomingly increasingly clear as to where things really matter…?