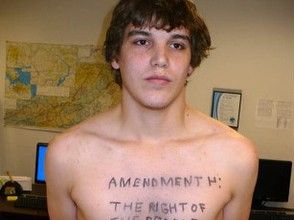 Aaron B. Tobey’s lawsuit against airport and federal officials is underway, the 21-year-old Charlottesville man who stripped down to his underwear in protest of TSA’s unreasonable procedures, revealing the Fourth Amendment written on his chest.

The Richmond Times-Distpatch reports that Tobey was detained in the Richmond International Airport this winter for 90 minutes, his hands cuffed behind his back, while officials determined whether he was a security risk.  His attorney, Anand Agneshwar, argued in a Richmond federal court Wednesday that Tobey’s constitutional rights were violated, while Carlotta P. Wells, an attorney for the U.S. Department of Justice, argued to dismiss the case.  The judge set a trial date for January 18th.

Seeking $250,000 for violation of the First, Fourth, Fifth and Fourteenth Amendments,  Tobey’s attorneys argue in court papers that the TSA agents and airport police “humiliated and punished him in direct retaliation for his protected act of peaceful protest, detaining and arresting him without probable cause, repeatedly searching his belongings, seizing and discarding certain of his personal effects.”

Tobey was eventually released to attend a family funeral.

This little rebel rouser sure picked a heck of time to stage such a stunt—on the way to a funeral, no less.  And picking on poor TSA employees who just want to get through their day and follow orders!  Anyone that mentions their Constitutional rights is pegged as terrorists– everybody knows that!  So you have to go through a naked body scanner, so what?  The government always knows what’s best, and I bet all those other passengers Tobey pissed off will be eagerly awaiting his trial date.  After all, flying is not a right; it is a privilege.

Isn’t it fascinating how white can become black when the question of terrorism comes into play? But that’s almost the point right? Or is it…?