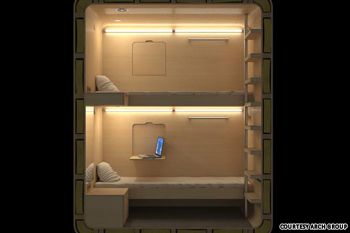 In general, I am a fan of hyperminimalism—building offices in the woods where you don’t actually build anything, people just set up shop under trees—if only as a camp concept.  Let’s face it: more is more, baby, but let’s hear out this original notion coming out of non-Soviet Russia.

At the Sheremetyevo International Airport in Moscow, designers have introduced their brain-child, the Sleepbox, a mobile unit with a bed inside available for travelers to rent out for a quick cat nap.  The box is about 1.4 meters wide, two meters in length and 2.3 meters in height, and architects are marketing the sleep-solution to not only airports and railway stations, but to city streets and local businesses.

The designers, Mikhail Krymov and Alexei Goryainov came up with the idea while travelling in Japan came up with the ingenious idea all on their own to serve a wide range of clients, even“tired boyfriends and husbands” in shopping malls.

For those concerned with clean sheets, picture this:

CNNGo: Sleepbox’s star feature is a two-meter-long bed made of polymer foam and pulp tissue that changes bed linen automatically.

Pulp tissue—let’s think of what that could mean.  …I give up.

Sanitation aside, there is a laundry list of contingencies to consider: drunk people puking, people having gross sex, loud people or children kicking the walls, lack of a toilet, etc., etc..  And I’ll go and head and spell this one out: Japan has been using these for a while now to increase work productivity. Kramer even offered his dresser for the Japanese businessman-clientele.

For something so minimal, it sure boasts a lot of bells and whistles: additional bunk-beds, fold-up desks, luggage space, ventilation system, WiFi, a TV.  Maybe that’s what sets the Sleepbox apart from its Japanese counterparts.

I say, tear down the oppressive walls, unscrew the locks from the doors, unscrew the doors themselves from their jambs!  Let the people sleep wherever they may!  Oh, but you cannot charge for that.  Pity, I suppose it’s back to the drawing board for me.