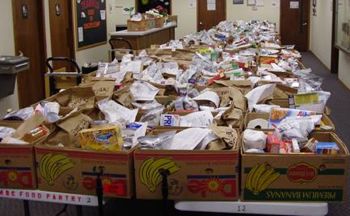 Raise your hand if you believe in religion? What about the church? Well you may want to put it back down after you read the following…

newsvine: “Winnipeg: A busy church food bank, known for offering warm drinks and snacks to its regulars, has announced it’s closing because it is attracting too many poor people.

This is what I like to call the ultimate oxymoron. Close shop because the people you set up to serve actually started coming. Unless of course you never really set out to serve those individuals who would most need the church’s assistance. But maybe then again the church only likes to be surrounded by rich people? Rich people who can freely give to them so they can help in creating missions. What kind of missions? Missions that are perhaps palatable to a particular constituency.

But before we all go running up to Winnipeg and start banging on their doors, lets ask some more questions?

Does setting up a food bank train people not to have to fend for themselves and essentially abuse what is support of the last resort system? Maybe if these individuals were given alternate courses of action and slowly weaned off that may be a start. But then again how do you get someone who feels the world owes them a living (which I know some of you are thinking, well apparently that’s what Unity’s Charlotte to say…) to get off the system and fend for themselves?- Perhaps that’s a question for social welfare officers to address, but will they, or is that a too case of political posturing?

Next question: What is the role of the church? Is it to nourish people and take them out of harms way as they have done in time honored tradition or is really about providing spiritual mooring? Maybe the church felt that their services were being abused? But then again maybe there are more poorer people to contend with (times are very tough right?) or just more people are now not afraid to openly acknowledge that they need help?

One could also wonder if the church would prefer next time when you are down and out to at least approach them with the appearance that you’re not really that down and out in the first place. Sticking around for a session on god probably wouldn’t be a bad idea either right? That of course might help assuage them of their guilt and at the very least give the impression to fellow church goers that the church hasn’t now become a haven for derelicts and crack heads. Which is another way to say, it’s alright to sin, but as long as it’s the appropriate kind of sin- I propose tax fraud if you must sin.

Or maybe we should give the church the benefit of the doubt and understand that it will resume feeding people but only those rich enough to give at the next church gathering?

Which brings me to my final question:

Will you turn up to a church food bank next time you’re in dire need of food?