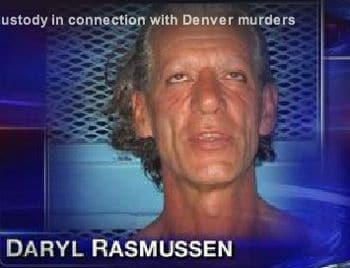 A double murder suspect cross-dresser (what a pervert) going by the name Ms. Puppy has been booked after a fellow Palm Springs bar patron noticed Ms. Puppy and looked up the name on their phone.  Turns Ms. Puppy was connected to the deaths of two men who took in a homeless Daryl Rasmussen/aka Ms. Puppy in Denver.

9 News Colorado reports that Ronald Ford was found dead in the basement of his home February 11th; his partner Ramiro “Rome” Sanchez was found a week later, both victims of blunt force trauma.  Rasmussen was nowhere to be found at the time of discoveries.

Investigators spread the word that Ms. Puppy was involved, leading to this arrest at a sports bar called Score: “He heard this male subject going by that moniker in the bar. So he started looking – and was bright enough to look on his cell phone – and brought up the media coverage from Denver,” Palm Springs, Calif. Police Department spokesperson Rhonda Long said on Tuesday. “He looked at the picture [on his phone], and said this was the guy.”

Ms. Puppy is not the most inconspicuous guise now, is it?  Denver police are not calling him in as a suspect, only a “person of interest” and potential source of information.  He was booked, then, not for the murders but for two other outstanding warrants in other states.

It’s always intriguing when queer elements like drag are thrown into the mix.  Makes for an easier vilification, but I’m not sure if it speaks to a dynamic knack for disguise on part of the perp or schizo motivation.  Was Ms. Puppy a new persona for Rasmussen, or one that he had been cultivate for some time?  Was it ‘Ms. Puppy’ who Ford and Sanchez took in, or Rasmussen? (Who takes in homeless cross-dressers in the first place?)

In any case, thank god for smart phones.  They’re making the public so much brighter.