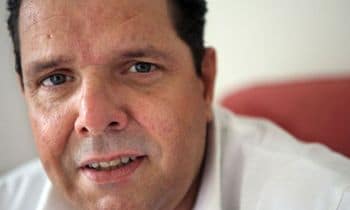 Sean Hoare, the former NOTW reporter who first divulged to the New York Times Magazine last year of the rife practice of phone-hacking at the tabloid, was found dead at his home yesterday morning.

The Guardian printed the following police statement made, which strikes us as very strange: “The death is currently being treated as unexplained, but not thought to be suspicious. Police investigations into this incident are ongoing.”

Hoare worked with David Cameron aide Coulson at the Sun and NOTW, where he reported Coulson actively encouraged him to tap into phones in order to get exclusives.  He was dismissed from his position for drugs and drinking problems.

Hoare returned to the spotlight last week, after he told the New York Times that reporters at the News of the World were able to use police technology to locate people using their mobile phone signals in exchange for payments to police officers.

He said journalists were able to use a technique called “pinging” which measured the distance between mobile handsets and a number of phone masts to pinpoint its location.

With these new revelations coming out daily if not hourly, why wouldn’t it be in the interest of NOTW to silence some of its more vocal critics?  With Hoare back in the news, the scandal polluting not only editors and reporters but police and government officials, as well, the stage seems set for some bodies to start piling up.  Sure, Hoare was an alcoholic and drug addict (who wouldn’t be, knowing all that he knew), but to dismiss his death as a suicide, totally unconnected to the pandemonium that is this hacking scandal, is suspicious in itself.

Updates to the News of the World scandal sure to come.

RUPERT MURDOCH ASSAULTED: WHAT GOES ROUND FINALLY COMES ROUND.