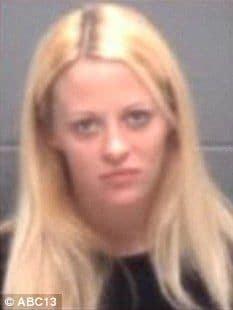 Daily Mail: Micah Ashley Alford, 26, was apprehended on charges of child endangerment and abandonment after police received a tip-off that she would be interviewing for a job at the Ritz Club in southeast Houston on Tuesday.

Alford refused to tell officers where her newborn son was. But, two women who had been caring for the baby handed him over the same day to police at a Walmart parking lot after they learnt that authorities were searching for him.

Alford was on probation for a DUI and child endangerment regarding another one of her four children.  Authorities knew that she had given birth five days preceding her arrest, and after an exhaustive search for the infant, the tip came from a woman who was caring for the baby, but gave him away to the two ladies from the Walmart.  All of Alford’s children are now with Child Protective Services.

Strangely enough, the tipster seems to have commented on the ABC Houston 13 story with this:

“there was nothing wrong with tht baby. she left him with me while she went to work. she left him with formula wipes and diapers and clothes. he was perfectly fine. she didnt ABANDON him!!!!!!i gave him to the authorities once i found out she went to jail n they were looking for him. but he was fine so u need to shut ur mouth if u dont know the ffacts. and the *** they say on tv isnt the facts.. its all lie…”

Perhaps this is not a story of “abandonment,” then, but a more inoffensive story of a mother looking for work?  We condemn a mother quickly for wanting to be a stripper, but at least she was searching for a job, right?  From that angle, she’s the monster that needs court-ordered sterilization but a troubled woman trying to care for the children she keeps having.

At any rate, this does mar the allure of strippers, knowing that maybe the woman just gave birth five days ago.