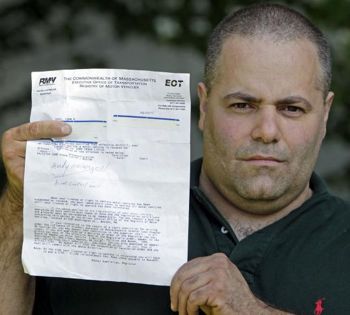 Let’s hope you don’t resemble anyone too famous or popular?

Here’s an interesting situation. In order to stamp out possible fraudulent behavior, up to 34 state motor registries have opted for a device that scans databases of millions of state drivers in the hopes of catching out drivers who look too similar to other drivers. Their reasoning, that you may turn out to be a fake and that if you are deemed a fake (for nothing more than your appearance) you too will receive a kind letter from the registry informing you something as Massachusetts’ John H Gass did recently that your license has now been revoked.

boston: After frantic calls and a hearing with Registry officials, Gass learned the problem: An antiterrorism computerized facial recognition system that scans a database of millions of state driver’s license images had picked his as a possible fraud.

It turned out Gass was flagged because he looks like another driver, not because his image was being used to create a fake identity. His driving privileges were returned but, he alleges in a lawsuit, only after 10 days of bureaucratic wrangling to prove he is who he says he is.

But don’t think that Mr Gass gets to share in the fun all by himself. No sirree. Last year alone 1000 lucky drivers were deemed to be imposter’s who could only vouch for their veracity by coming down to the registry (yes a task most of us relish with abandon) with their identity to show cause.

It may also interest you to know that Mass. registry sends out 1500 suspension letters every day. Of those 1500, it has yet to be realized how many were sent in error. Nevertheless, authorities claim it’s been a powerful weapon to fight fraud.

But just in case you get peeved the registry had this to say:

“A driver’s license is not a matter of civil rights. It’s not a right. It’s a privilege,’’ she said. “Yes, it is an inconvenience [to have to clear your name], but lots of people have their identities stolen, and that’s an inconvenience, too.’’

That said, last time this author had the pleasure of spending a day in the sphinx zone called bureaucracy (don’t ask why) he thought many times that he could do without certain privileges, but then again the real fun ought to start when letters start coming because the postman or the grocer suspected our facial features did not ideally match with some secret interior code- but of course sometime in the future we’ll all be reminded even buying eggs is a privilege that one ought to get used to respecting as well…