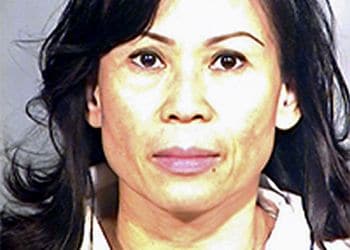 Personally we’re not sure which manual book Catherine Becker dug out her particular of tricks out of, but it seems her soon to be ex husband, to his unfortunate dismay had the displeasure of being on the receiving end of same unsavory party tricks. What type of party tricks you wonder? Let’s carefully zip our flies and follow the blood marks…

dailymail.co.uk: A woman has been arrested after drugging her husband and tying him to his bed before cutting off his penis and throwing it into the garbage disposal, it has been reported.

Catherine Becker, 48, is said to have made her husband dinner at their California home on Monday night and put an unknown poison or drug in the food to make him pass out.

Which allowed Catherine Becker a whole evening to savor what she would then do next.

Upon waking up, Catherine Becker’s husband found himself in the inconvenient situation of being tied to his bed with his morning hard -on (don’t ask us why science works this way…blah) with his wife making for a knife which she then promptly used to sever his genitalia from his body. (Once again mad science).

Satisfied, (one would imagine), Catherine Becker then proceeded down to the garbage disposal where she of coursed disposed of her husband’s ahem, genitalia.

When the police finally arrived, Catherine Becker made sure to explain to arresting officers that her husband most assuredly deserved his fate and that this was only just punishment.

The moral of the lesson: Sometimes one has to spend an evening daring themselves to do the unthinkable the next morning while others spend a lifetime side stepping having to ever find themselves in such morbid situations.

So much for happy until death (or mutilation) do you part.