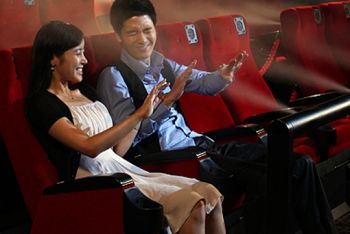 Korean exhibitors, perhaps realizing that 3D technology was over by the 1950s, instead of abandoning the spectacle experience have continued to revive the cinema of attractions.

The Daily Mail reports that “A Korean company has built cinemas with seats which rock and special effects like wind, fog, strobe lights and scents are synchronised with the on-screen action.”

If that does not sound intrusive enough, massaging chairs lightly ‘punch’ you and tilt all around; bubbles come from the ceiling to simulate fireworks; and you could leave the theatre all wet.

“Some customers complained of feeling damp from the water effects after watching Pirates of the Caribbean: On Stranger Tides but ‘smelling sweet’ like Captain Sparrow star Johnny Depp.

“And there were reports of people becoming nauseous and going temporarily deaf after watching Transformers: Dark of the Moon where the major smell is the scent of burnt rubber.”

CJ 4DPlex already has theatres in South Korea, Mexico, China, and Bangkok; they have opened an office in LA and plans to build a theatre in New York.  It was widely reported that more people went to see the new Pirates in 2D (how silly that we have to qualify that) rather than 3D, so 4D technology would hopefully increase box office revenue.

New York Magazine says , “U.S. price points are still hush-hush, but in Seoul, tickets are currently 18,000 wan (about $17), which is double the cost of 2-D tickets and a couple of bucks more than 3-D tickets.”

If the novelty of 3D has so quickly faded (for a historic second time; it did not work when theatres were so afraid of that new device, television), why would people invest in a technology so like an amusement park?

I will stand my ground (and stay on the ground; apparently they want to build seats that fly?) and say the novelty of this technology will definitely wear off.   Then again, it would be fun to try it maybe once or twice.