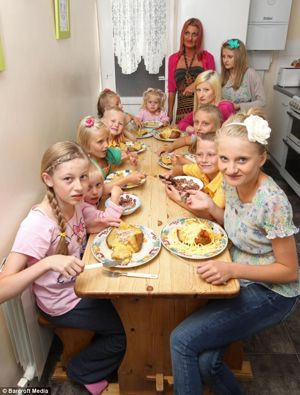 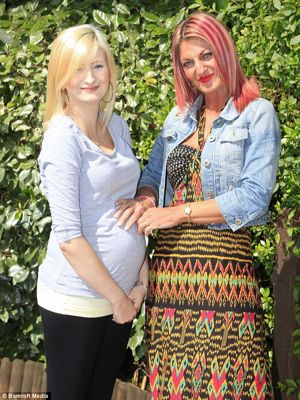 Does the apple ever fall too far from the tree? What to say, what to think?

15 year old Mariah Watson, one of 14 daughter and sons of 40 year old Joanne Watson (who coincidentally happens to be the biggest family in the UK) has some good news to share- she’s expecting a child. The bad news- the father has up and left the scene and Mariah is now like her mother of 14 set to start to live off benefits as well.

Like her daughter, Joanne Watson has been unlucky in love too, after parting ways with her husband and then another subsequent partner. But Joanne, who collects 2000 pounds a month in state handouts doesn’t seem to be particularly dispirited. Why you wonder?

dailymail.co.uk: Despite this, she has still managed to squirrel away enough cash for a £1,600 breast enhancement and a sunbed. She claims she has always encouraged her daughters to use contraception – but, inevitably, it seems they would rather follow the family tradition.

Which is to say life will invariably manage to go on at the Watson household, and perhaps in a splendid way after the matriarch of the house finally gets what one can only imagine is a much needed breast augmentation. But of course the Daily Mail who first published this story would like you to feel that somehow you the British taxpayer has somehow being robbed for Mrs Watson’s indiscretions, never mind that of her daughter’s.

That all may on some level may be true, but one ought not to forget there are a lot of indiscretions that go on from all walks of life and if Joanne Watson has somehow managed to squirrel away a tidy  £1,600 for a new and improved her, who are we the wiser to deprive her of her impending treats? 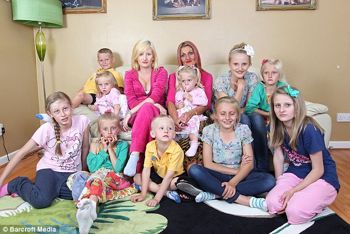 But now that Joanne’s 15 year old daughter,Mariah is pregnant one has to wonder how she too will manage with responsibilities usually thrusted at women sometimes twice her age and older?

She is expected to move into a housing complex for single mothers and will receive supplementary benefit and child allowance for her baby.

The youngster, who is due to have a boy, said: ‘I’m not nervous. I’ve been around babies my whole life so I know what to expect and that I can handle it. The father isn’t involved and I don’t want him to be either. I’m really excited and think I will be a great mum.’

A great mum? But what if Mariah despite her best intentions doesn’t end up being a great mum?What will happen then? Speaking of better moms why didn’t Mariah’s mom, Joanne, not warn her daughter of falling pregnant at such a young age? Unless she of course advised her that getting pregnant and collecting off the state was a no brainer. Or was this just a simple deduction 15 year old Mariah made on her own?

Mrs Watson, who had her first child at 18, said: ‘Of course no one wants their teenage daughters to get pregnant.

‘I’ve always urged them to use contraception – but if they refuse to there’s not much I can do about it. But I don’t believe in abortions, and Mariah wanted to have the baby, so now I just have to do my best to support her.

Who also has to do their best to support her as the Daily Mail would like to remind you- is you, the British tax payer. This one imagines is the point you are suppose to tear your hair out and swear up and down that it’s welfare cheats like the Watsons that have burdened the system and in essence helped to make your life miserable. Never mind all the welfare dependants called hedge funds, corporates off shore funds and reduced tax brackets for the well to do. But at least to be fair, these entities don’t have 14 children idly lying around waiting for their opportunity to one day follow in mother’s footsteps.

But just in case you think you have Joanna Watson figured out, she offers the following:

I don’t know what everyone finds so extraordinary – it’s easy having 11 children at home, and I love it.’ She added: ‘People accuse me of having loads of kids for the benefits, but I have my children because I love being a mum – not for the money. I also get pregnant very easily.’

The mother admits she still wants to be pregnant again – and that she was even jealous of her daughter’s pregnancy.

The moral of the lesson? Some people like getting pregnant and having lots of babies despite their lack of funds, because where there is a will and if there is a welfare state they will manage- just like all the other corporate barons who get to keep their baby golden nuggets of cash.