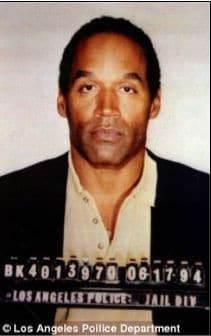 Oprah Winfrey finally gets the coup she has been looking for, but does it really matter?

The Dailymail has just released a story claiming that disgraced ex footballer and celebrity OJ Simpson has agreed to go live on air with Oprah Winfrey and admit to the dual killings of Nicole Brown Simpson and Ronald Goldman.

dailymail.co.uk: O.J Simpson has confessed to Oprah Winfrey that he murdered his former wife, it has been reported.

The talk show host made headlines recently saying that one of her regrets was never having got the shamed former sportsman to confess to the killing.

And it appears her wish may well have come true with reports Simpson has already told one of her producers in an interview from jail that he knifed ex-wife Nicole in self-defence – a confession he will now repeat to the talk show queen during a spectacular televised sit down interview.

What strikes immediately to mind is why has Mr Simpson suddenly decided to claim involvement in the murder of both Nicole Simpson Brown and that of Ronald Goldman? Is this a situation of good conscience? A situation of helping an old friend who’s ratings have taken a severe beating, or a situation that Mr Simpson is now a reformed individual who wants to come clean with himself and the world? Or is it simply a situation of wanting to once again be the center of attention?

According to the National Enquirer, the interview is set to be filmed after Simpson confessed he killed the pair in self-defence to a producer from inside prison.

‘Oprah has been in touch with O.J. for the past year,’ a source told the magazine. She contacted him in prison to explore the possibility that he might give her an interview.

‘He has always been a big fan of hers, but for a long time he was reluctant to say he did the crime or give the details of how it happened. What makes Mr Simpson’s admission interesting is that in his own words he acted in self defense despite the evidence that was gathered and his own statements which would allude that in fact the murders were premeditated.

The former couple had got into an argument after Nicole was said to have snubbed Simpson when he interrupted a meal she was having at a restaurant with their children.

‘O.J. said he went home and kept getting angrier and angrier and worked himself into an absolute rage,’ the source told the Enquirer.

Simpson allegedly told the producer he ‘didn’t like the way she treated me in front of the kids at the restaurant. I didn’t like that she was routinely having guys have sex with her at her condo with the kids there.

‘I went over there to give her a piece of my mind,’ he was quoted as saying.

A piece of his mind? And what if Nicole Brown Simpson hadn’t been in the most beguiling state of mind to receive Mr Simpson’s state of mind?

When he arrived and no one answered at the house, he started pounding the door and shouting, according to the report.

The door allegedly then swung open and Nicole was standing there with a kitchen knife in her hand.

‘O.J. told the producer, “she was yelling go away! Go away! And waving the knife around at me. At one point she was lunging at me with the knife and I was just trying to talk to her. Nicole stepped out of the apartment – slashing the knife in the air.

‘”I was in such a rage that something just snapped. I couldn’t take her constant taunting of me with other men or her using drugs and drinking while my kids were living with her. I went beserk.

Who also went beserk was an entire nation that watched transfixed as Mr Simpson’s trial played out over coming months. But perhaps nothing was more surreal than the following:

Almost 100million people are thought to have watched the events live on television as the sports star held a gun to his head while being driven by a friend.

He was allegedly headed for the Mexican border with $5,000 dollars and his passport when he was tracked by authorities.

Eventually, 27 police cars trailed him until he surrendered on his mansion’s driveway an hour and a half later.

But despite Mr Simpson’s desire to come clean the end result might mean much after all.

If the confession is made to Oprah on television, Simpson will not, however, suffer legal consequences.

Under the law of double jeopardy, a second trial is forbidden following an acquittal.

So much for coming clean….