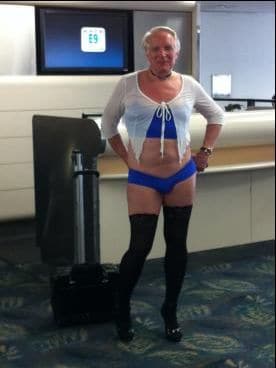 US Airways would like to remind you men that cross dressing in female undergarments is quite acceptable, however wearing pants that sling below your underwear is completely unacceptable.

An elderly man flying on a US Airways flight from Fort Lauderdale to Phoenix recently was allowed to make his flight wearing nothing but female undergarments. Courtesy of outraged bemused fellow passenger Jill Tarlow, a picture of the elderly cross dresser made it to the San Francisco chronicle.

That within itself would have raised a few eyebrows, but the real controversy seems to be that six days prior, a San Francisco college football player, Deshon Marman, also flying US Airways was arrested for wearing his pants too low.

“Police arrested [Deshon] Marman, 20, who grew up in San Francisco, after he allegedly refused an US Airways employee’s request to pull up his pants to keep his underwear from showing. Marman’s later refusal to comply with the pilot’s orders to get up from his seat led to his arrest on suspicion of trespassing, battery and resisting arrest, police said.”

Marman’s attorney, Joe O’Sullivan, said his client had been stereotyped by US Airways as a thug, and that the airline was guilty of racial discrimination for asking Marman to adjust his clothes. Marman is African American.”

The bottom line seems to be that an African American provides reason for arrest when his boxers are exposed, but nobody minds when an older man decides to dress in less-than-fabulous women’s lingerie.

A spokeswoman for US Airways told SF Chronicle that “the airline’s stance that Marman had not been removed from the US Airways flight last week because of his clothing, but because he had failed to comply with an employee’s request.

“The root of the matter is, if you don’t comply with the captain’s requests,” [spokeswoman] Wunder said, “the captain has the right to handle the issue because it’s one of safety.”

An issue of safety… ?

Does a man in drag present less a threat than a black man with sagging pants?  A captain can accept a weirdo passenger wearing stocking and heels, but never a “thug,” a black man with his boxers below his pants.

Which reminds us are saggy pants even provocative anymore? But then again unless I’m mistaken they’re a safety violation (god forbid anyone trip over their own boxers)?

One has to wonder if  this is really an issue of freedom of expression, even it seems to be more attuned to identity-politics.

Score one for cross-dressing, 0 for being black.