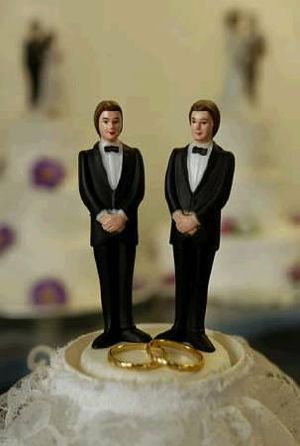 With the swift stroke of a pen, Governor Andrew Cuomo legalized gay marriage just before midnight last night, and by proxy made being gay something that a majority of the state could finally accept without the deep suspicion it always rendered.

huffpo: The victory is all the more remarkable because it comes just two years after gay marriage supporters badly miscalculated their support in the same chamber, watching their same-sex marriage bill go down by a 24-to-38 margin after a dramatic floor debate.

That said, one might be beguiled to ask what changed this time to finally allow the passage of same sex marriage?

As older New Yorkers passed away and younger ones with more tolerant attitudes took their place, the percentage of voters in favor of gay marriage kept on going up and up, from 37 percent in 2004 to 58 percent at the beginning of this month.

But that doesn’t necessarily explain the push that came from within the senate, where divisions ran deeply against party lines, with a staunch Republican front wishing to preserve regressive ‘core’ values.

The organizing around the effort was very different in the midst of the last marriage fight. “There was no coordination back in 2009,” Hopkinson said. Now she and her partner, along with dozens of other volunteers, used rapid dialing phone bank software that could patch people in directly to their senators — a far cry from the personal cellphones they used two years ago. Their mere presence in the Midtown office building that hosts SEIU, moreover, was a testament to the vocal support of the state’s labor unions.

But then there was the vocal support by an unlikely supporter- that of the governor himself:

Much of this successful strategy was directed by Cuomo, whose popularity has not faded even after the announcement that his budget would cut 10,000 state jobs. Cuomo made same-sex marriage one of his top legislative priorities and the high poll numbers and groundswell of support from ordinary New Yorkers might have made little difference without his determination.

All of which raises the following questions, apart from all the backdoor deals that Governor Cuomo had to orchestrate with various church leaders to gain concessions and the mass marketing apparatus of certain constituents why the long resistance in the first place?

In a country that purportedly values freedom, equality, it so often exhibits strains of paranoia, distrust, dogma when in reality all we are dealing with is another human being’s desire to legally cohabitate with whom they choose to, prey where they want to, walk down the street without the threat of retaliation, harassment or being sexually discriminated against.

Which raises another question, why does gender, religion, race and skin color so often cloud our collective judgement, when so often it is the visage of the privileged brave white male who is so often the first to ague he is being discriminated at when he didn’t get the raise he was supposed to get at work? Thank God this time we were able to sully him to his senses….

So much for brave white males.