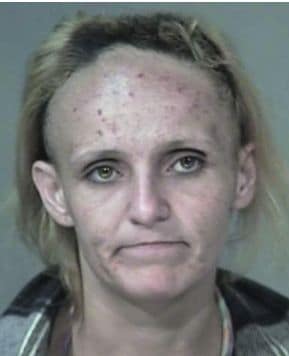 Getting to the bottom of misplaced grenades.

This past Thursday Renee Deshaies stopped by one Dairy Queen store in Mesa, Arizona to buy ice cream. What made her visit even more interesting (never mind her unkempt presence) was the thing in her possession- a training grenade. According to whom you believe she was only just showing the grenade to employees, ’cause supposedly it was all too exciting to keep to herself’ or ’cause she threatened employees’ with it?

azcentral:The woman entered the Dairy Queen in the 600 block of East Main Street in Mesa on Thursday evening and bought ice cream. Before leaving, she pulled the grenade out of her pocket and showed the employees. No other customers were present, police said.

The employees called police after she left the building and told police they feared for their safety. The police contacted the woman as she was riding her bike away from the Dairy Queen.

Mesa’s Hazardous Device Team looked at the grenade and determined it was a training grenade that could not have been detonated.

She also claimed she was going to call 911 after she was arrested but since authorities beat her to it- they had to work out what and where Renee Deshaies had come up with the grenade.

In the interim Renee was arrested and jailed on one count of misconduct simulating an explosive and disorderly conduct.

If only Renee had left the grenade where she found it…