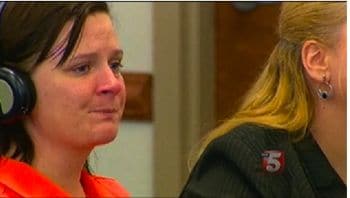 Are you expecting a baby soon?

The following can only be described as surreal, or if you happen to be the victim- Jamie Stice– horrific.

gawker:Kathy Michelle Coy, a 33-year-old Kentucky mother of two, allegedly befriended a pregnant woman on Facebook before subduing her with a stun gun, killing her, and cutting out the baby with a drywall knife.

Got your attention. Now the gory parts…

According to Kentucky State Police, testifying today at a preliminary hearing, Coy claimed to have hidden a miscarriage from her husband and their son and daughter. She then apparently approached both of her children separately about taking part in a plot to kill a pregnant woman and take the baby; her kids both demurred (Coy “passed it off as a joke”), at which point Coy began to befriend at least two pregnant women on Facebook, including Jamie Stice, a 21-year-old expecting mother.

If this doesn’t count as ingenuity I don’t know what does? But then again this may also count for slimy and despicable- choose the adjective that best describes your current state of mind.

Talking of state of mind, what inspired Kathy Michelle to go the distance?

The allure of the chase? The desire to undo her miscarriage? The little thing in her head which pleaded she had to hurry up and invent a new born baby? Or the fear that she wasn’t worth anything unless she had a little critter to play with- never mind if she had to go hunting (literally) for one.

Last Wednesday, police say, Coy told Stice she would take her shopping for baby supplies. Instead, Coy drove the woman to a “wooded area,” incapacitated her with a stun gun, slit her throat and cut the baby out. She then took the baby to a friend’s house:

The friend called for an ambulance after helping to clean the baby and taking a picture of the newborn, Winn said. At the hospital, at about 5:50 p.m. CDT on April 13, Coy brought in a uterus, ovaries and placenta with umbilical cord still attached, along with the baby, Winn said.

Hmm- brought in the ovaries and placenta. That must have convinced hospital staff that Kathy Michelle Coy was onto something. Or did it?

Hospital staff called police. Coy insisted that she had given birth to the baby, later telling detectives that “she bought the baby for $550 from a woman named ‘Ashley,’ but provided few details.”

And how did that story go down?

“After a while, she kept saying that Ashley came back with the baby, and detective Allen said ‘there is no Ashley, I believe you’re Ashley.’ And she smiled and said ‘you’re right,'” [Kentucky State Police Detective Chad] Winn added.

Detectives attempted to track down Coy’s pregnant Facebook friends, but couldn’t find Stice. Coy would later lead them to the “wooded area” where she had apparently left the body.

The baby is in good condition. His name is Isaiah.