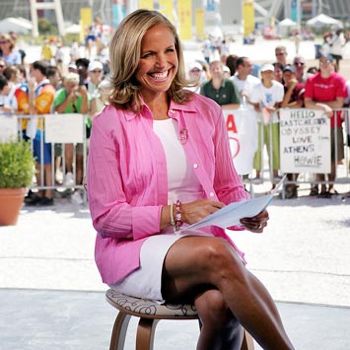 Who will guide us through the cross currents of world news once “America’s Sweetheart” Katie Couric and her $15 million salary are off CBS’s books?- assuming of course there is anyone left to be guided at all.

WSJ.com: News anchor Katie Couric will likely choose to leave her “CBS Evening News” chair and make a jump to daytime television when her contract expires in June, according to people familiar with the situation.

The void left by Katie’s evening news exit will surely prove itself difficult to fill, with studios mulling various replacements- and while Ms Couric might be fielding mounting offers- one has to wonder, does any of this really matter?

As of Monday, Ms. Couric’s spokesman Matthew Hiltzik said she hadn’t made a choice regarding her television career. “Katie is considering various options but hasn’t made a decision about her future,” he said.

Couric’s mass viewer exodus has quietly been more destructive to CBS than the public brawl between it and enfant terrible Charlie Sheen– which conveniently has acted as a wonderful smokescreen to the exodus at the hands of America’s darling.

Of course we should wonder, has Ms Couric’s failure at CBS to bring in an audience been a reflection of her own brand failure or a more systemic trend in declining cable viewership and apathy?

A recently commissioned study shows the top three evening newscasts experiencing  a 44.5% decline in viewers since 1980. Current events are now consumed on demand, releasing us from the tether of prime-time news broadcasts.

The real conundrum is: Is the highly paid prime-time news anchor a failing model? Did Katie see the writing on the wall and decide to leave with grace instead of the embarrassing alternative?

Only time will tell, but one thing is for certain: Once TV execs realize Katie Couric is but a wolf in sheep’s clothing, TV Land will be a much safer- and slightly less annoying- place.