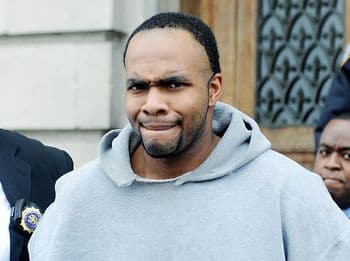 How far would you go to get high?

NY Daily News: Accused killer Christopher Jackson told cops he stuffed a T-shirt inside his grandmother’s mouth and secured it with rubber bands to suffocate her before getting high and wolfing down six waffles.

Charged with second-degree murder, the sordid stoner allegedly told police that his grandmother, 62-year-old Rosemary Little, had ‘fallen down the stairs’ before he admitted to suffocating her so he could smoke three joints and enjoy six waffles.

Little, an avid churchgoer, had allegedly argued with Jackson about his cannabis craving that morning; but unfortunately, the women had no way of knowing that the argument would prove deadly later that day.

“I didn’t call for help because nobody would believe me and that they would think I am responsible for mom’s death,” Jackson told detectives Tuesday after Little’s body was found wrapped in a blanket in a basement storage space at her Jamaica, Queens, home.

Death by falling down the stairs wasn’t the only story that Christopher Jackson had crafted for the cops however, and as it typically goes with the batshit insane, his story only gets more bizarre.

Finally, around 11 a.m. Tuesday, Jackson claimed he killed his grandmother because a younger woman had assumed her identity.

“I did this to her because of the identities,” he said. “I put a white T-shirt in her mouth to keep her quiet after she fell down the stairs..I got the scratches on my head when I was cleaning the house.”

Little was discovered in the basement storage unit by family members after they were alerted by the Manhattan law firm she worked for as a legal secretary that she had not shown up for work.

Maybe if Christopher Jackson had extinguished that last joint a bit sooner, he would have realized that all the green in the world wasn’t worth a life’s worth of orange. And undoubtedly the life of the person that loved him most.