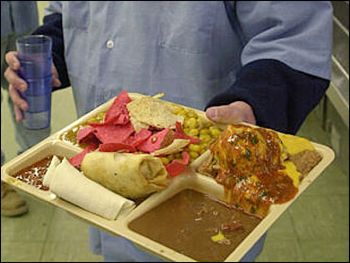 Faced with a massive budget shortfall child obesity epidemic, Little Village Academy Principal Elsa Carmona has decided to take things into her own hands. Quite frankly, she just can’t take it anymore.

Chicago Tribune:  To encourage healthful eating, Chicago school doesn’t allow kids to bring lunches or certain snacks from home — and some parents, and many students, aren’t fans of the policy.

“Nutrition wise, it is better for the children to eat at the school,” Carmona said. “It’s about the nutrition and the excellent quality food that they are able to serve (in the lunchroom).”

It certainly has nothing to do with the $2.50 toll they’ll be collecting from these soon-to-be emaciated prisoners students on a daily basis. Given the nutritional value and romanticized view of cafeteria food, this was the most logical move for Czar Principal Carmona, and the money is merely a bonus.

“While there is no formal policy, principals use common sense judgment based on their individual school environments,” Monique Bond wrote in an email. “In this case, this principal is encouraging the healthier choices and attempting to make an impact that extends beyond the classroom.”

Installing an iron-clad “eat this baked potato or starve” policy isn’t exactly “encouraging healthy choices,” especially when you consider what really passes for cafeteria food. And yes, this policy will certainly have an impact that extends beyond the classroom– area dumpsters are sure to be ravaged shortly after that afternoon bell sounds.

I’m sure the Honorable Principal Carmona has played out every conceivable scenario that may arise from this new legislation, so she’s unlikely to be caught off-guard once a thriving “real food” Black Market erupts at Little Village.

Such sage wisdom is exactly what today’s youth needs– that and some Tums if you happen to be a student at Little Village.