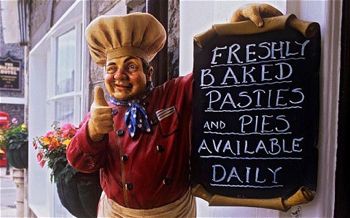 How you are being deceived…

Ever thought to yourself the food you’re eating can’t possibly be fresh or organic, even if the sign on the wall says it is? Well according to a study out of the UK, one out of 6 farm shops, delicatessens and restaurants that claim to offer “organic,” “fresh” or “handmade” food are in fact cheating their customers.

telegraph.co.uk: Of 180 outlets checked by food standards officials, 30 were found to be charging customers more by making false claims about the health value of the food they served.

Investigators found that the “hand-made potato cakes” advertised on one menu were in fact frozen hash browns, while the “hand-carved ham” on another was pre-packed and frozen.

One outlet claimed to sell “home-made pies” which had actually been bought in bulk from a national wholesaler.

Which begs the immediate question- why do these outlets misrepresent the truth? Is it in the hope that by making their food sound more exotic that they will be able to get you to eat it and of course fork over the higher prices (that so often come with food associated with being fresh and organic) and how is that most people don’t in fact notice that something doesn’t quite taste right? Or it is simply a case if one is told something is fresh or organic we eat it anyway ’cause most of us just simply can’t tell the difference’ even if we would like to believe otherwise?

“In many cases, food is described as being fresh when in fact it has just been heated up in a microwave in the pub kitchen. If they are also claiming that food is organic when it’s not then that is shocking, because the public should be able to trust the food that they are ordering.”

“Food fraud” is a growing problem in Britain as consumers become increasingly willing to pay more for produce seen to be fresher, healthier or less harmful to the environment.

Shocking? Perhaps what might be more shocking is the idea that more producers/restauranteurs don’t try to pull this scam more often (or do they?). After all when was the last time the maitre d invited you round to the kitchen to inspect the food and quiz the chef?

A nationwide investigation found in September that pubs and restaurants were offering bogus “local” and “regional” produce at an inflated price.

In North Wales, only half of the meat sold as ‘Welsh lamb’ – which has been recognised by the EU as having special status and quality – was the real thing.

A restaurant in Fareham was found to be selling “Hampshire spring lamb” which was actually reared in New Zealand, while a “home assured apple pie” sold by a restaurant in Fylde, Lancashire, had in fact been bought in a supermarket.

Which makes us wonder, perhaps the most surest thing thing that comes close to organic is when you have lovingly tended to the item in question – yourself.