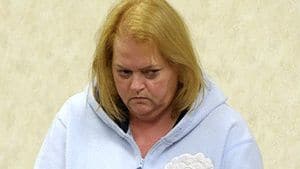 Would you drug your child to look like he had cancer and then ask for a payout?

Carol Scnuphase isn’t receiving a lot of love from family and friends these days. Convicted for her role in orchestrating a money making scam off the back of her son, even her own relatives are disappointed that her sentence of one year behind bars as being too lenient.

msnbc: Carol Schnuphase, 47, pleaded no contest in February to charges of second-degree child abuse and acting under false pretenses. On Tuesday, she apologized for her actions in Macomb County Circuit Court before Judge Richard Caretti announced he would send her to the county jail rather than his preference — state prison.

In fact the defendant’s aunt – Lorraine Kelsch had been petitioning that she receive a 5 year sentence.

And her son, who supposedly had cancer?

Prosecutors said a hospital tested the boy, who is now 13, and declared him cancer-free, although he was going through opiate withdrawal.

For her part Mrs Schnuphase claims she never gave her son any ‘opiates of any kind,’ just the illusion of course he had cancer….in fact at one stage she had her own son believing he had leukemia, an effect accentuated by her shaving off her son’s eyebrows and hair.

Mrs Schnuphase’s defense lawyer had this to say, in the event you are like us wondering what prompted all of this…

Greco said his client’s actions were out of character and may have stemmed in part from her husband’s sudden death and the recent loss of her job.

“She was basically at the end of her rope.”

Seems like that was one short rope. While we’re at it, how much did Mrs Schnupahase manage to rope in?

Prosecutors said Schnuphase last year solicited donations from individuals, groups and members of at least one church who believed they were helping to pay for her son’s medical care as he underwent chemotherapy. She received $7,500 from a church fundraiser, in addition to other donations, and her son was given gifts, including an Xbox video game system.

And how has this affected family relations you wonder?

The state is trying to terminate Schnuphase’s parental rights to the boy, who now is in foster care. A hearing on the matter is scheduled for April 15.

While Schnuphase’s relationship with her son has yet to be settled, other family members said they’re moving on without her.

“Her entire family has abandoned her, because she’s proven herself to not be worth associating with,” said her cousin, Patrick Kelsch.

Which ultimately begs the question, why risk alienating, betraying your own family, your own son, when in times of need they are so often the very people we turn to? But then again perhaps Mrs Schnuphase thought she could get through the darkness of night without them and ironically she will have to, especially now that her son whom she allegedly did this all for has been taken away from her.