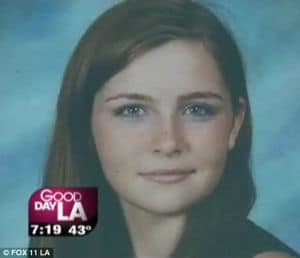 Imagine the shock of finding out as a 13 year old girl your parents are planning on sending you to a foreign land, Pakistan of all places for an arranged marriage. Your impulse? To stick around or run for dear life?

dailymail.co.uk: A 13-year-old girl who had been missing for more than a week ran away over fears she was to be sent to Pakistan for an arranged marriage, police have claimed.

Jessie Marie Bender has been taken into child protective custody after a relative who was protecting her led detectives to the California hotel where she was hiding yesterday.

Jessie’s family had reported her missing on February 22. They told police they feared she had been abducted by a man she met on Facebook.

But now police are livid with the Bender family for concealing the fact that the girl may have run away in lieu of her pending marriage overseas (can 13 year old girls get married in Pakistan?) and essentially tying up valuable resources and the police department’s time. Which begs the question- if the Bender family knew enough that telling the police the whole story might solve the question of her whereabouts, why did they fail to disclose this piece of critical information? Was it out of embarrassment, out of not wishing to expose the idea that they planned to wed their 13 year old daughter off or were they simply thrilled to have the police department hanging by close quarters, the idea of relinquishing their presence to heavy to bear?

For her part Melissa Bender, the mother had this to say:

Mrs Bender insisted to the Hesperia Star that her daughter had not fled because of the trip to Pakistan.

‘She didn’t really want to go but she was fine with it,’ she told the newspaper.

‘I really don’t think the trip played a role in her leaving. She was actually excited to go shopping for the trip.

‘I even asked her friends and they said she wasn’t upset about going so I really don’t think that was the reason.’

Which forces this author to wonder out aloud, if Melissa Bender was for just one moment once again a 13 year old girl and had just learned that she was being shipped off to Pakistan for an arranged marriage what would she do? Would she stare at the sky and dream giggly daffodil flowers or look for her runners and hightail it out of there?