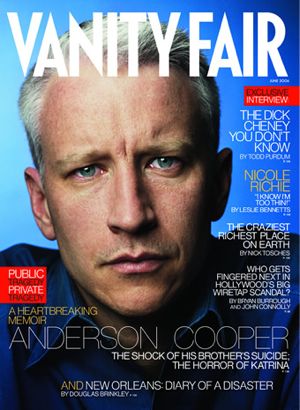 This past Saturday, Anderson Cooper, the contentious news reporter for CNN and one cold argue more persona and vitriol than journalist publicly announced via twitter that after a week in Egypt in which he was physically attacked and harassed that he would be heading back to the United States. Which raises the question what of the future of just not Mr Cooper, but other gilded journalists who risk harm’s way for the sake of the story.

HuffingtonPost:  Anderson Cooper announced on Saturday that he is leaving Egypt after a week in which he and his crew were repeatedly targeted by supporters of President Hosni Mubarak.

He tweeted “It is with a heavy heart that I have decided to leave #Egypt. CNN continues to have many teams in place. It was a hard decision to leave.”

Cooper was attacked twice by pro-Mubarak forces. On Tuesday, he was punched in the head repeatedly. On Wednesday, the window of the car he was in was smashed through by a rock. He was forced to go into hiding and report from a secret location.

The fact that Mr Cooper sustained injury and risk to his life portends to the serious nature of events in Egypt, but more importantly the significance of an alternate voice that allows for a different perspective other than the state sponsored propaganda, never mind the propaganda in the United Stated courtesy of the mainstream media. After all what gets said or not said often influences the course of history and the social dogma.

With respect to Mr Cooper returning to the US, like other high profile journalists- aka Katie Couric and Brian Williams perhaps signals the end of an era where a high profile journalist once behaved as an agent on behalf of their outlet in some war torn drought stricken (pick your favorite adjective…) territory and on some level has become as equally as important as the network that they represent- which only serves to make Mr Cooper and his erstwhile peers no longer journalists, as much as they like to believe they are- but in the eyes of an offended diaspora, and perhaps one wonders in certain quarters here in the United States a legitimate moving target….

ISN’T IT TIME YOU GOT YOURSELF GLASSES LIKE THIS ‘HAWT’ BITCH ABOVE?

WHO WOULD YOU RATHER HIT? RICKY MARTIN OR ANDERSON COOPER..?

ANDERSON COOPER GOES DOWN TO HAITI TO BECOME AN ACTION HERO.

SHOULD ANDERSON COOPER HAVE SHARED A TEAR DROP WITH LARRY KING?