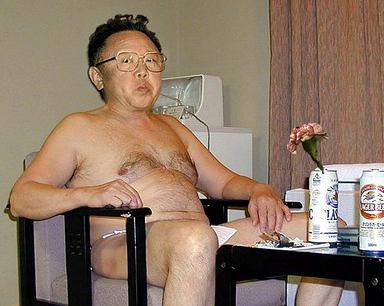 Shouldn’t you be a dictator in your spare time too.

First of, let us wish King Kim Jong ll a happy birthday as today he and his languishing nation commemorate his 69th birthday. Which is to say despite crippling food shortages and foreign currency reserves Kim and the nation managed to get it on. And how…

telegraph.co.uk: As the North’s state media observed a “solar halo” rising over the Dear Leader’s mythical birthplace at Mount Paedku, sources inside North Korea reported that much-anticipated birthday handouts had failed to materialise.

The state media added that “pride and joy” had pervaded the country as officials filled hours of state television professing tearful loyalty to the regime, while the UN reported a mounting food crisis.

Kids, let’s confess, me and the chipmunks scurrying up and down the foyer are swimming in tears. In fact there are so much tears, we have taken to turns sucking each other’s tears out of our collective eye sockets, no mean feat if you ask us. And in fact, we are so honored we have created a make shift plaque of Kim with a discharged broom we came across down the hallway with a smiley face made of Jim Bean bottles.

In the northeastern province of North Hamkyung even ruling party officials had not received their birthday gifts of up to 10 days rations of rice and corn, according to The Daily NK, a Seoul-based newspaper with connections inside the North.

Birthday presents? Never mind, me and the chipmunks have been using our scissors to cut out shapes out of today’s NY Trash Post and pinning the remnants on our lapel. To say that the tears are in overdrive would be an understatement.

The handouts are designed to inspire loyalty and confidence in the ability of the regime to provide for its people who are reported by the UN’s World Food Programe to be facing shortfalls of more than 500,000 tons of grain this year, leaving five million people short of food.

Food? What for? Me and the chipmunks have taken to licking the back of stamps for nutrients, and let us tell you the ‘shit’ works- cause we’ve all at least lost 45 pounds each- but never mind, better to be a thin and lean subject of Kim Jong’s as opposed to a fat and gnarly one like here in the Western world.

The shortages come at a politically perilous moment for the Kim as he seeks to engineer a dynastic handover of power to his youngest son, Kim Jong-un, who is only in his late 20s and is still building his powerbase with North Korea’s militarist state apparatus.

Speaking of which me and the chipmunks have been thinking about flying over to North Korea and doing a feature on the King and his family. After all who wouldn’t want to know what Kim and his son get up to on the weekends as the greater populace withers away. I bet they at least get to play a wonderful game of golf by the peninsula where all those military heads are kept. And if we are lucky we’ll get to have one round too. Only one problem, no one seems to fly to North Korea, and me and the chipmunks aren’t quite sure why?

More senior officials are said to receive gifts including Rolex watches, Armani Suits and Gucci handbags, however this year reports from Seoul said that the North’s cash-strapped buyers in China had been reduced to purchasing fake goods for the first time.

Fake goods. Oh gosh, what a fun game that must be. We used to do that at school when we had no money but heaps of imagination. In fact when it comes to fake goodies, I’m dreaming of this year’s rendition of the new Porshe 911. I bet Kim has a couple of them babies in the garage.

Analysts say the regime will be hoping for an improvement of its fortunes in 2012 when it will be forced to stage a truly lavish ceremony for double celebration of the Dear Leader’s 70th birthday and the centenary of his father, the North’s Eternal President, Kim Il-sung.

One day when Kim finally gets round to sending me and the chipmunks to the palace we will surely turn up and when Kim turns to clutch us and offer his benediction we will look at him in the eye and smile warmly – “Kim- if it wasn’t for you we’d have no time for nightmares and those fake paper presents we like to bestow each other every time we get wind of your birthday, and yes a glass of fake bubbly would suit us just fine.”