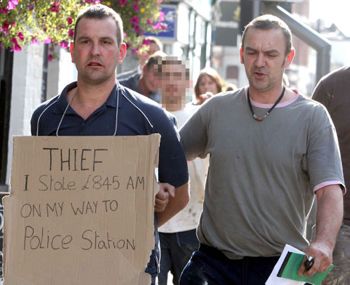 Has your employer made you wear a sign that exposes your mischief in public lately?

Out of the UK today comes a beguiling case whereby Simon Cremer forced his employee Mark Gilbert to wear a large sign that stated the following “Thief. I stole £845 am on my way to the police station,” after he was caught by Cremer for embezzling company cheques.

For his pain and humiliation, Gilbert (who was let off by police, apparently he had been paying his employer at later dates and the case hasn’t gone to trial) then turned around and sued his former employer, which if you can imagine hasn’t pleased Mr Cremer one iota.

telegraph.co.uk : “I think it’s absolutely disgusting that he was even able to sue me after he had stolen from me to be honest. I don’t want to give him a penny after what he did, so it really sticks in my throat.

Understandably it would stick in our throats too. But the greater question may be, did Mr Cremer by publicly forcing Mr Gilbert to wear a sign in public that essentially demerited his character, violate Mr Gilbert’s rights, and if so what about Mr Cremer’s rights pursuant to the misappropriation of funds that led Mr Cremer to behave the way he did?

Speaking of behavior could one argue Mr Cremer had no right to behave the way he did and on some level usurped the disposition of the law more than Mr Gilbert had?

Gilbert, a floor fitter, claimed for two years’ lost earnings and the “distress” he suffered after being walked through the town.

He claimed he needed psychological help after the incident. The case was due to come before a civil court on Monday but father-of-two Mr Cremer said he could not risk the expense involved.

As is often the case of litigation, the sheer cost of going to trial often outweighs the potential benefits of seeing your name cleared or reversing judgements against you. Thus often forcing one to choose not between guilty or innocent, but the better of two evils:

“It would have cost me £25,000 just to go to court, so I had no option but to settle out of court. I could not afford to take it to court, so there was no other option.

“It would financially ruin me, it would break me. I would lose my business and I would risk losing my home because I would have to remortgage it.”

The moral of the lesson? Even if you know and think what you are doing is immoral or not, never underestimate the way someone will respond to your cause of action, cause at the end of the day, as much as we may wish it otherwise, morality or the way we react to it changes from person to person, country to country and sometimes behaving in a way that goes against society’s understood codes of conduct may be the greater moral and criminal violation.