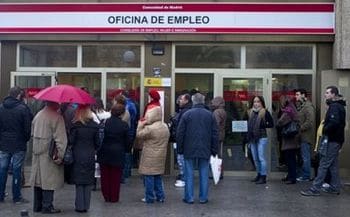 One in 5 people have no work in Spain.

While the US has been hobbled with an ‘official’ unemployment rate hobbling circa 9 – 9.5 % (who knows what the real ‘street’ rate is) Spain released some sobering news this Friday which reveals its jobless rate has surged to a 13 year record of above 20 %. News we doubt that will be sending the workers looking for their cava…

yahoo:  It was more bad news for an economy fighting to regain the trust of financial markets and avoid being trapped in a debt quagmire that has engulfed Greece and Ireland and now menaces Portugal.

Another 121,900 people joined Spain’s unemployment queues in the final quarter of the year, pushing the total to 4.697 million people, said the national statistics institute INE.

The resulting unemployment rate was 20.33 percent for the end of the year — easily exceeding Prime Minister Jose Luis Rodriguez Zapatero’s target of 19.4 percent.

Spain appears to be stuck in a rut of staggeringly high levels of unemployment.

Which raises some important questions, why is that Spain and other industrialized nations, especially those in the OECD are unable to get out of their quagmire? Is it something to do with the vast debts that they owe,(you can thank the construction industry for Spain’s high debts- which is non existent these days and saddled with property values at vastly diminished rates than just 3 years ago) the pressure from the financial community to immediately pummel the bond and equity markets if it doesn’t ‘behave’ itself or just a structural malaise inherent in Europe?

Spaniards see unemployment as Spain’s biggest problem and one in two, 49.8 percent, fear the jobless situation will get worse, a poll published by the CIS research firm this month showed.

A reform that it seems has yielded very little in terms of employment numbers going up, but at least one can speculate that Spanish bonds and equities are a firm buy for now as everyone dumps them overboard and the Spanish government, like all industrial government these days is forced to come up with strategies that will see these financial instruments propped up in value, never mind the guy begging for food down the street.