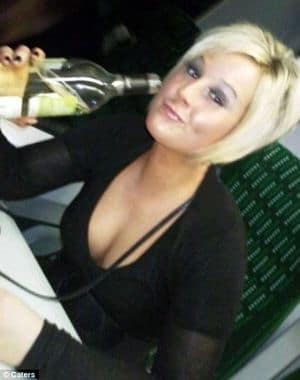 Will Laura ever be sober?

It’s time for a tale about a 21 year old woman from England who seems to have a bit of drinking problem. In fact her drinking problem isn’t a small one at all- it’s an overwhelming one, but that of course hasn’t stopped Laura from recently passing out stone drunk on the corner of the street after one recent drinking expedition.

dailymail.co.uk: The woman banned from buying or drinking alcohol anywhere in England and Wales has fallen off  the wagon again.

Laura Hall was fined £75 last week after admitting being drunk and disorderly and breaching a  two-year court order barring her from licensed premises.

Oh well just a slight aberration, hopefully with some councelling Laura will get back on the wagon. Except she’s just come off a national show which is set to air in a few days where she is said to have found sobriety and cleaned up her life thanks to the shows efforts to get her sober, and of course now Laura had to get stark drunk just before the show- thereby humiliating the show’s producers.

Rehab has turned my life around, ‘ she said in an interview publicising the programme.

‘I cringe at photos of me drinking now. I tormented my family and would have died if I’s carried on. I want my story to help other girls quit booze.’

Except Laura now has a different message to communicate and it’s not necessarily the one fans, producers and advertising sponsors were waiting to hear.

On Tuesday she was arrested near her home and spent the night in police cells before appearing in court, according to the Sunday Mirror.

Laura has revealed how she used to binge on lager, bottles of wine and vodka shots on a typical night out.

Which makes us wonder what is about Laura that wont let her stop,or to be precise what is it that’s tormenting Laura so much that she can’t get past the torment and hence the desire to obliterate herself as a self dealing mechanism?

In the past, she has been convicted of a series of public order offences and flouted bans from pubs and clubs in her home town. A study by the Joseph Rowntree Foundation in 2009 found that female binge drinking had almost doubled over the last decade.

After all it’s one thing to be banned from one bar and another thing all together to be banned from every bar in England and Wales. Beyond being barred from every public drinking venue it seems Laura has barred herself from fully addressing the concerns that keep her recovery at bay. But then again can one really be expected to recover and face their demons when a camera crew and advertising team are hanging near by prodding Laura to say the ‘right things?’

Either way it should be an interesting show, but in all seriousness we do hope that Laura gets the care and attention she really needs as opposed to the sunshine camera crew in Portugal where she is once again filming.