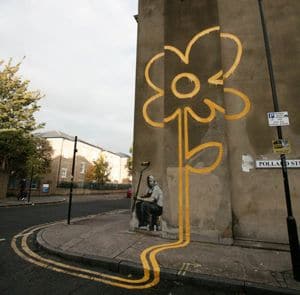 E-Bay, everybody’s favorite online auction house, recently removed the following curious listing: $25,000 to reveal the identity of the super secretive street artist, Banksy – complete with ‘free shipping.’ Allegedly, the seller had “uncovered [the artist’s] identity by matching up the prices of his sold pieces to corresponding tax records.” A likely, if slightly illegal sounding, story.

Luckily one user at an Australian online gaming forum managed to get the following screen capture before its erasure from our collective online memory. 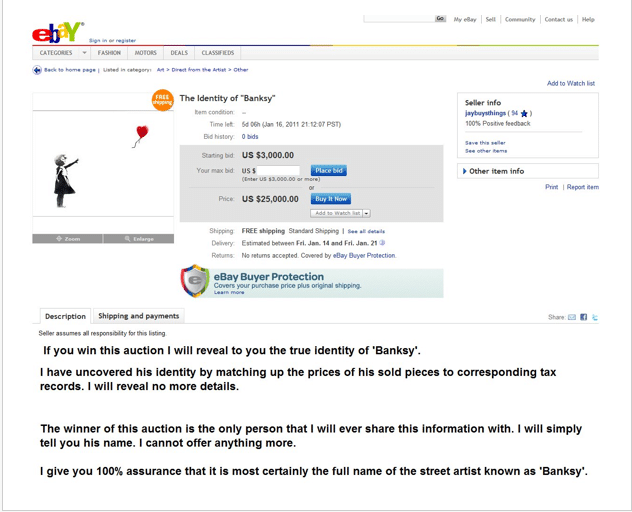 While commenters have already questioned the story’s veracity, the seller, jaybuysthings, did give “100% assurance that it is most certainly the full name of the street artist known ‘Banksy.’” But from what I could see, no money back guarantee. This means footing the bill, had it been a scam, would likely have fallen on E-Bay, as the company boasts a Buyer Protection protection program.

Perhaps, then, only one thing can be certain: few people in the world are more skilled than Banksy when it comes to putting up graffiti in attempt to get some free publicity. And few online spaces are more public and highly trafficked then E-bay. Which, I suggest, creates the distinct possibility that  we’re looking at the last remnants of an online Banksy. Or more likely, an imitation Banksy. This would at least suggest the possibility that, with the landscape of the physical world already seemingly conquered, online space is now due for its own deluge of ‘Banksy’ graffiti.

Besides, could there be a better, or more appropriately pointless, statement about how, in contemporaneity, the artist’s name has itself becomes the ‘real’ commodity? Maybe someday all the acned online hordes will repeatedly fulfill their avant-gardist dream of being (or at least being possessed by the idea of)Banksy… how’s that for a question of identity?