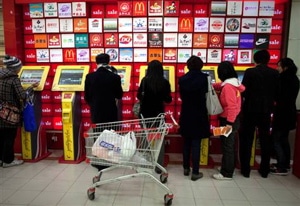 Supposedly ‘obsessed’ Chinese youth desperately ‘dreaming of the next deal’ while filing in line for discounts sometime before dawn have have become the newest initiates of the rather sarcastically termed ‘cult of the coupon.’

The quickly developing country’s thrift spending phenomenon, is said to be rising chiefly in the 18-35 age bracket in tempo with skyrocketing incomes and typical American fears of just what the Chinese economy is (at least potentially) capable of.

Somewhere between abject absurdity and the impending unseating of America as the world’s number one consumer economy lie claims that these Chinese youngsters are relishing in their love of spending because, according to professor Fu Guoqun of Beijing University, they think ‘they’ll always have money.’

Despite reports that some Chinese women have been eating roundworm eggs to lose weight for job interviews because, as the Huffington Post reported, ’employment is so hard to come by,’ this starry eyed optimism has created an atmosphere of endless discretionary spending, an insatiable desire purchase something unneeded simply to get a discount on it. This because, according to Chi-Chi Zhang’s MSNBC, article the Chinese value frugality, as Savvy consumers are applauded by friends and family. So much so, it would seem, that even the corporations and their innovations have trouble keeping pace with this thriving market of bargain hunters.

As Zhang also reported, A planned three-week campaign by Mercedes-Benz for its two-seat Smart car ended in a day when the more than 200 cars were snapped up in less than four hours at about 135,000 yuan ($20,000) each, a 20 percent discount, on China’s most popular online retailer.

This is only one example of many possible. For instance: Nuomi.com, previously little-known, became an overnight sensation in June by offering a $25 package of two movie tickets, two sodas, ice cream and popcorn for only $6. It sold about 150,000 packages, generating nearly $900,000 in sales over a 24-hour period.

Perhaps no one has summed up the situation better, or more succinctly, than Leeon Zhu at the Shanghai office the international advertising agency Young and Rubicam, who offered the insight that “This isn’t your grandma or a housewife cutting out Sunday coupons in her kitchen, because they [the Chinese youth] are the future.”

All this points to a radically new kind of business and advertising strategy, at least in the Chinese market, to account for a consumership for whom coupons and discounts are as important as brand names and branding.

As Xie Dehui, the vice general manager of a coupon company called Eyeball, explained: “The market is so saturated with brand names that a small discount makes a huge difference helping the brand stand out with their target consumers.” And with the rise of billion dollar coupon services, such as Groupon, one has to wonder whether coupon services will someday overtake advertising.