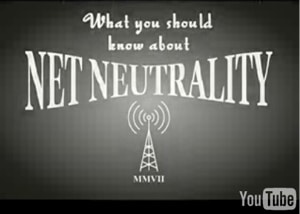 Speculations have been abound regarding today’s vote on net neutrality. And with the amount claims and counter-claims being blogged, tweeted, or by any other means thrust into one of the many competing feeds, even the most astute among us (at least judging from their articles) seem a little bit dizzy. While debate is still out as to just what, exactly, these new rules portend – and perhaps even mean in practice – the harshest criticisms and most triumphant promises all revolve around the potential fragmentation of the internet as we know it.

Fragmentation, we would not be amiss to say, is the core concern of the FCC‘s new rules which would disallow broadband networks from blocking any legal content outright (hence the ‘neutrality’ aspect), but would open a much debated loophole enabling service providers (e.g. Verizon or AT&T) to charge more depending on the type of content accessed. Said to be a reform intended to allow for better management of what Reuters called ‘network congestion,’ such a solution makes all content no longer necessarily equal in the eyes of a service provider, but instead subject to a ‘tier system’ which would, in turn, fall under FCC regulation. This, proponents of the regulations say, will create an atmosphere of innovation and competition as, in essence, more middle men will be required to hold together a space which once was united, if under the relative monopolies of Facebook, Google, etc.

For instance, depending on your provider (and the services they’re pushing), Facebook or YouTube could cost more to access per megabyte or month than another brand’s content. A recently leaked power point presentation created by Allot Communications and Openet – two companies which provide subscriber optimization software to Verizon and AT&T – described the system and even supplied the following graphic: 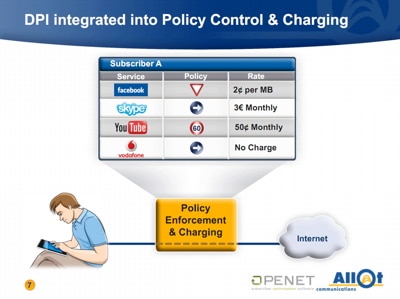 (Notice that the man in the picture doesn’t really seem to be smiling.)

The above proposition marks a drastic change to the net’s physical makeup and a sharp turning point at which the space comprising the internet – having finally been explored and conquered to its knowable extents – must be quite literally cleaved, carved up: the first sign of the end the web’s initial era of (perceived) exploratory freedom, and the beginning of a new age of hegemonical domination, the chief feature of which is the implementation of a virtual caste system.

This particular fear has perhaps best been articulated by Sen. Al Franken who, as paraphrased by Wired, slammed the rules as woefully inadequate to protect the public from the privations of an industry keen on turning the internet into a cyber-version of cable TV, with tiers and premium packages affordable by the wealthy.

The Wired report goes on to explain: For the first time, federal policy would allow for so-called reasonable paid prioritization, which critics argue is the first step toward cleaving out high-speed, premium fast-lanes from the public internet.

In these concerns we see illuminated the far deeper issue at hand here: the potential changes inherent in these regulations foretell the same vogue unification of sociology with technology only becoming more common as the very sensory system through which we increasingly filter our perception is becoming intertwined with a fragmented, and potentially warring, kind of class system which shatters not only the  flat, democratic space of internet, but all the equality ever (falsely) promised by it.