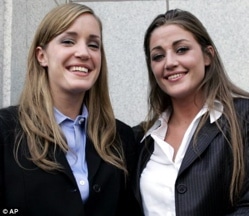 In the continued media documentation of high profile suicides comes the disturbing case of Anne Hatch.

DailyMailCoUK: A respected family is in mourning today after the 27-year-old daughter of a top lawman committed suicide.

Anne Hatch, whose father Mike was formerly the attorney general of Minnesota, was found dead in her Chicago home on Sunday afternoon.

To date no compelling reason has been offered as to why Ms Hatch took her life. But some clues abound…

Miss Hatch graduated from Chicago’s DePaul University with a degree in communications.

At the time of her death she was working in the health benefits division of management consulting firm Accenture.

In 2004, Miss Hatch and her older sister, Elizabeth, were arrested following a confrontation with a police officer outside a Chicago nightclub.

The Hatch sisters said officers used excessive force. They were acquitted in June 2005 of battery, resisting arrest and criminal damage.

Yet even this isn’t necessarily a precursor for someone to take their life. Especially as one commentator courtesy Eric M Larson over at Minneapolis city pages blog notes:

I’m all in favor of bringing up the 2005 trial… as long as we’re honest about it and do some reporting beyond merely saying “a judge acquitted them” and reporting nothing else.

Anne and Elizabeth weren’t merely “acquitted” — they were vindicated by the judge who noted that the prosecution’s witnesses contradicted 1) the police report written at the time of the incident, 2) recorded audio of Elizabeth’s arrest, and 3) security video of the incident. That’s as close to “they lied!” as you’re ever going to get in a court ruling.

The police abused their power, the Hatch women stood up against that abuse, were maliciously prosecuted for it, and were declared innocent in court. The _full_ story is an example of Anne Hatch’s bravery and character, but it’s hard to find that story today because it’s locked behind newspaper pay-walls.

Some of us still remember the court case from when it was a “current event” and the media’s selective memory of it today is really frustrating.

Should we wonder for a moment that the media’s selective handling of a particular case in 2005, perhaps an indirect way to sully the reputation of her father- Mike Hatch harbored deep resentment in Ms Hatch to the point she eventually saw no out and little vindication of her character? Or was this the result of some unrelated incident, an incident that somehow must have brought Ms Hatch to another state of emotional disrepair that this time she was unable to tolerate?

How to kill yourself in public and create a scene: A study in the American myth.