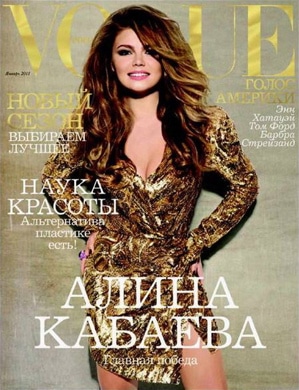 How to piss off your readers…

styleite: Fashionista reports that readers are not at all pleased with Davydova’s cover pick, or the direction she is taking the mag. As one former fan wrote on The Fashion Spot: “What a downgrade, I am completely shocked and disappointed. What on earth were they thinking about when they picked this shot? Everything is just wrong about this cover and why Alina? I am so angry, I don’t even want to buy the magazine this month.”

Which has us wondering what inspired Viktoria Davydova when she chose to use the alleged mistress? Could it be that she has been paying attention to her Western counterparts who have made a resounding habit of using contentious role models to give magazine sales a nice uplift? Or was this just merely an attempt at compelling aesthetics, aesthetics which which at first glance have even us grimacing?

Fashionista: It doesn’t help that Kabaeva is wearing the same gold Balmain dress that has already seen countless covers. Five pages of comments have already amassed over at the online forum The Fashion Spot bemoaning the new Russian Vogue.

If Davydova was intending to rustle some feathers she certainly has managed to do that, if on the other hand she was also hoping to give sales a lift, could one perhaps politely tap her on the shoulder and remind her as much as America loves its contentious media whores, perhaps appropriating such strategies in the mother land may on the surface seem inspiring, but upon further investigation especially upon using the words ‘Her main victory’ in Russian between Alina Kabaeva’s legs (most probably alluding to her purported relations with Mr Putin and perhaps a veiled statement on most female’s perceived accomplishments) one has to wonder is Russia ready and eager for a downtrodden version of People or worse Page 6 staring them in the eye?

Sometimes even a sexy dress needs to be just that, worn at the most compelling moment, even if the urge to shock and titillate right now and then is too much to resist…not that even we here at the West have completely managed to master such inclinations.