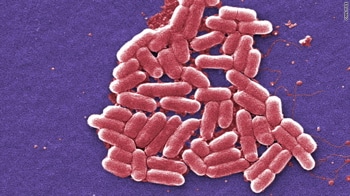 A recent report surely already responsible for multiple nervous breakdowns and existential crises has stated that scientists at the University of California, San Francisco have created bacteria that can be programmed like a computer, bringing humanity one step closer to fully merging life with technology.

According CNN‘s article on the subject: Researchers built “logic gates”  the building blocks of a circuit  out of genes and put them into E. coli bacteria strains. The logic gates mimic digital processing and form the basis of computational communication between cells, according to synthetic biologist Christopher A. Voigt.

While the cells’ logic operations are still resigned to simple functions, Voigt said the research lays the groundwork for cellular communication similar to computers.

As Voigt further explained, ‘We want to create a programming language for bacteria…We want to program code for bacteria just like you would for a computer.’ Ideally scientists will then be able to (cue the maniacal laughter) ‘gain programmable control of everything biology can do. Maybe they’ll manage to succeed where governments failed, though only barely…

While it’s not hard to imagine the potential advantages of such bio-technology for example in the pharmaceutical and agricultural industries many have been keen to voice concerns for how such advancements may be misused or even abused.

The debate should be most noteworthy for crystallizing the increasingly plausible prevailing fear of a future a situation in which technology has absolute power of biology, where not only that which is living or being is abjectly controlled by the  mechanical, but where the definition of ‘being’ along with how it interacts with free will must be redefined from the beginning.

Which opens a whole slew of rather metaphysical questions. For instance, can you really can you really call yourself human if your cells are being controlled by computer programming? With transhumanism on the horizon such discoveries as this are sure to spark the heated debate on the nature of technological determinism.