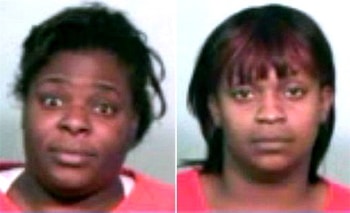 Two Oklahoman women have been storing more in their bulging tummy sacks than just this morning’s Big Macs. In fact, police say, Ailene Brown, 28, and Shmeco Thomas, 37, have been arrested under suspicion of felony shoplifting by stuffing $2,600 worth of discounted clothing and accessories under their bulging breasts and belly rolls before attempting to tumble out of a local TJ Maxx.

In total, the robbers tried to smuggle four pairs of boots, three paris of jeans, a wallet and gloves past whatever TJ’s calls their security. The duo’s meticulous plan, apparently, was to slice off all the security tags with a hidden knife (don’t worry it was in a purse) so they could escape to freedom without setting off any alarms.

The NY Daily News reported that, according to local police officer James Hamm, One of the women…tried to smuggle three pairs of boots underneath her breasts. The police report, unfortunately, didn’t seem to specify the size of either pair in question. If only the Transit Securities Administration had been there instead: can you imagine the agony and ecstasy?

More than just another freak show, isn’t this a sign that that as this country’s poor are forced into eating fatty fast-foods for lack of funds, they’re beginning to adapt, using their newly formed and often freaky bodies to manipulate their environment by turning their weaknesses into strengths to help their chances of survival?

In a weird way aren’t we witnessing evolution at work here, outliers trying a new tactic in hopes of turning their fatness into a genetic advantage? Which of course, calls into question the very essence of ‘fitness.’ Since at least biologically it’s always changing in step with its environment, are we really even able to objectively define it?