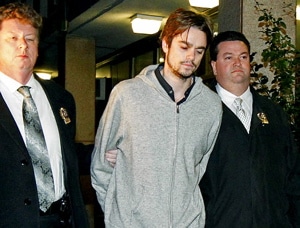 The suspicion is that Brooks (whose body the police had obtained a warrant to examine for signs of a struggle) strangled Cachay to death after their relationship imploded.  Cachay had allegedly been emailing her publicist about an unstable boyfriend and crumbling love as early as two weeks prior.

Reportedly the the relationship that NY Daily called, quite appropriately and with requisite tabloid alliteration, ‘a mismatch made in misery,’ began during the aftermath of a supposed ‘poodle tragedy.’

Wrote NY Daily: Sylvie Cachay, distraught and vulnerable after her precious pet was run down by a car a couple of months ago, was soothed by Nicholas Brooks – a hard-partying, unemployed younger man with a sympathetic ear. Which seems to imply that Cachay who was found with with red marks on her neck and a bite mark on her hand on Saturday  apparently didn’t treat her unstable new poodle to his liking.

Though Brooks is yet to stand trial (what a media spectacle that’s sure to be) why this story, in particular, seems so enthralling is not hard to see: Isn’t it both unfortunately and appropriately theatrical to think that the bad boy from the wrong side of Broadway who once saved Cachay from her suffering then fatally bit the proverbial hand that fed him?

One tragedy rolling into another, feeding from the remains of that one immediately prior and always increasing in intensity… doesn’t this speak to the very form and nature of modernity  life as an inescapable, uncurable, and always increasingly cathartic serial tragedy?