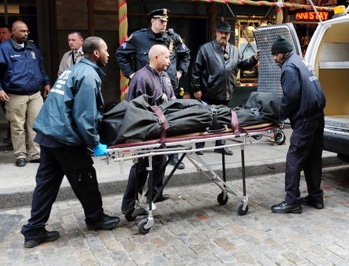 A family scion continues to crumble.

Media and financial outlets are today shocked to find out that this Saturday morning disgraced Bernard Madoff‘s elder son, Mark Madoff, who helped run the once booming Madoff financial empire but in another (apparently) division from his father was found hanged dead in a Manhattan apartment. The sudden death now giving greater weight as to who exactly was involved in the ponzi fiasco that brought down the Madoff empire and unfortunately ruined many people’s lives. It should also be borne that today was the second anniversary of his father’s arrest….

NYDailynews: Mark Madoff, 46, was discovered hanging from a pipe inside his luxurious Mercer St. home in Soho around 7:30 a.m. by his father-in-law, who immediately called 911, the sources indicated.

His two-year-old son was asleep in another room, sources said.

If anything can bely the feeling of helplessness and grief, taking such a morbid action as to hang oneself whilst their 2 year old son soundly sleeps in the other room should be proof enough. If one can imagine the grief and turmoil Mark Madof’s father may have caused him, one can only imagine the impending grief that will be caused one day when Mark Madoff’s son is reading the history books.

Mark Madoff was chatting via computer with his wife Stephanie, who is out of town, before taking his own life, sources said.

She became worried and called her father to check on her husband.

The father in law rushed to the house only to make the gruesome discovery.

Yet what is also known that may have tempered Mark Madoff’s decision to take his own life was the law suit that both he and his younger brother Andrew Madoff received this week at the hands of Irving Picard, one of the trustees of the now defunct Madoff fund.

The Madoff money “paid for all aspects of his lavish lifestyle from the purchases of his high-end homes to the mattress and box spring he slept on, the television he watched in his home gym, and the outdoor shower in his home,” the lawsuit charged.

This on top of the fact that Mark’s wife successfully petitioned to have her and their two son’s surnames changed from Madoff to Morgan in an attempt to save face and public humiliation. Mark Madoff had chosen to retain his surname.

In an attempt to strike out on his own after his father’s subsequent arrest, Mark Madoff along with his brother Andy whom since the disclosure of their father’s feats had refused to speak to their parents these last two years attempted to attain a trading position on Wall st, which met with no success, more likely a reflection of other investments firms looking to distance themselves from the Madoff fracas. Itself ironical given how much those very firms once hoped to emulate the Madoff empire and a sign of how much Mark Madoff really craved the devotion and respect of his apparent peers whom had quietly distanced themselves from the hubris associated around the Madoff name.

With Bernard Madoff sitting in jail, his son now deceased, his grandson a waiting basket case on the make, and other members of his family tainted and effectively tossed out of the society that they all once thought they embodied and craved can one really begin to imagine the rancid thoughts that must be vehemently going through Bernard Madoff’s mind as he too sits down today and digests the latest consequences of his actions. Not even the ancient Greeks or Shakespeare could have imagined a more diabolical theatrical script…