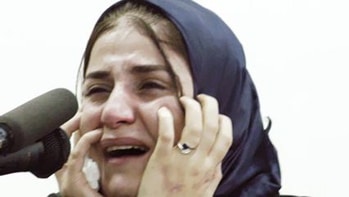 Shahla Jahed loses her 8 year campaign at the gallows.

Shahla Jahed, the contentious mistress of famed Iranian football star Nasser Mohammad Khani was hanged this morning 6 am Tehran time after she finally lost her appeal seeking to prove her innocence in the murder of Nasser Mohammad Khani wife. To be sure the gallows heard her agonizing pleas for clemency before the chair she was standing on was finally pulled from under her.

UK Telegraph: State media said Mr Khani attended the execution. Before it took place, the condemned woman was said to have prayed in public, then burst into tears and made a final plea to be spared.

The brother of the murdered woman carried out the final act by pulling the chair on which she was standing away from under her.

In keeping with the Islamic tradition for an eye for an eye (qisas) Shahla was originally sentenced to death in 2002 before an international campaign was mounted to spare her life.

Huffington Post: Jahed had become what is known as a “temporary wife” of former soccer star Nasser Mohammad Khani. She was charged in 2002 with stabbing his wife, Laleh Saharkhizan, to death and convicted of murder in 2004 and again in 2009, after her appeal was denied.

Contracts with “temporary wives” are a legal way for Iranian men to have mistresses outside marriage, with the agreements lasting from between several hours to a few years.

Legal arrangements that sometimes work well assuming there is no perceived rivalry between the ‘legal wife’ and the ‘temporary wife.’ A rivalry which is said to have existed between Jahed and Saharkhizan perhaps to Khani’s mild consternation…And then there was this:

prnewswire: At her trial, after describing the torture she endured during her nine years of incarceration in Evin, she declared that she would rather be falsely convicted of other murders than return there.

Perversely Jahed got her wish…

UK Telegraph: Her family had refused last-minute pleas at the entrance of the jail from both judicial officials and a campaign group of artists and activists to commute the sentence.

Miss Jahed’s case was held up by human rights groups, including Amnesty International, as an example of flaws in the Iranian judicial system.

The main evidence against her was a confession which she retracted immediately she was brought to court, and Iranian judicial experts also questioned the strength of the conviction.

And of course when the law is the law who is anyone to question it? Especially when it alludes to a ‘temporary wife.’

One day in the future when a woman is approached by a married Islamic man to partake in a concensual affair she will stand there and wonder will she too have to bear the wrath of an inhibited society or partake in momentary bliss before she too potentially has the chair pulled from underneath her.